Two Movie Reviews In One: Midway 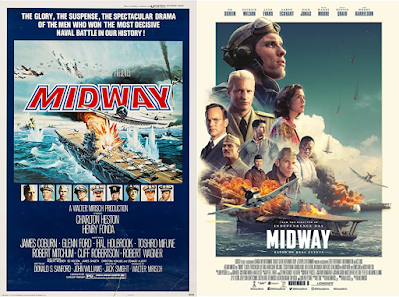 Another movie I have been wanting to watch is the 2019 version of Midway. I grew up watching the great WW II flicks: Tora! Tora! Tora!, A Bridge Too Far, The Longest Day and of course Patton. Midway was one of my favorites, the 1976 version with Charlton Heston, Henry Fonda, James Coburn, Robert Mitchum and many more, including a young Pat Morita playing a Japanese admiral long before he was Mr. Miyagi or Arnold in Happy Days. It featured a lot of cobbled together actual war footage and in 1976 was only 31 years removed from the end of WW II so it resonated very differently to the audience. The acting was kind of wooden and the effects were typical for the time, so they weren't great. Still it was a great film if you aren't one of those people who notices that some of the scenes apparently included British and German planes.
The 2019 Midway "remake" featured a less distinguished cast but still has some big names: Woody Harrelson, Dennis Quaid and Ed Skrein who I just know as Ajax from Deadpool. The plot is basically the same, viewing the lead-up to the battle of Midway that turned around the Pacific campaign and put the Japanese on the defensive. The acting wasn't great, the dialogue was a little forced and some of the accents were terrible (looking at you Ed Skrein)
Unlike the slower pace of the earlier version, the 2019 Midway has too many loud and over the top battles. The Pearl Harbor scene in particular was downright silly. Movie producers apparently think people need endless CGI explosions or they stop paying attention. Mind you, I am not saying they are incorrect.
One thing they did capture well in the new Midway was a glimpse of how horrifying it would have been to fly a torpedo plane straight into gunfire or screaming in a dive bomber at the deck of a carrier in the face of withering anti-aircraft fire. When you are coming right at a ship full of people shooting at you and there are Japs in Zeros shooting at you at the same time, you have to be made of stern stuff to keep going.
The film did make some minor efforts to show the absolute cruelty and viciousness of the Japanese. We know them now as polite people with no crime and no military who make weird cartoons but in the WW II era they were as inhumane as anything humanity has ever witnessed. It must be an Asian thing, my very kindly neighbor where I lived while growing up fought in Korea and said that the Koreans and Chinese had absolute no regard for human life.
Probably the most powerful part was the Doolittle raid. Those boys had balls you would have to haul around dump trucks, flying shitty planes that weren't meant to take off from carriers to drop three whole bombs each on Tokyo knowing that they wouldn't have enough fuel to get back so they would either have to ditch in the ocean or parachute into occupied China. Absolute kings. The whole thing was just a morale boosting fuck you to the Japs and they risked everything to complete the mission.
Two movies made over 40 years apart covering the same historical event. For all of the advancements in technology that have done things like make a great adaptation of the Lord of the Rings possible, film-making in general has grown poorer, more prone to flash and sizzle and less to story and character. Studios today are cowardly and timid, scared to do anything new or risky. The 2019 film was a money loser, costing $100 million to make and only bringing in $126 million worldwide

I can't say I was disappointed because I didn't expect much but it is still jarring how crappy "entertainment" has become.
I am going to rewatch the older version of Midway this weekend and remember when films were still entertaining without CGI.
Posted by Arthur Sido at 1:37 PM