That Is Not Good

This morning I had my van in at the dealership for an oil change (I had a coupon) and while I waited they had RFD TV on in the room. Lots of commercials for fungicide and tractors and rodeos. One thing jumped out at me and that was corn prices. They have spiked recently after a year long run up.... 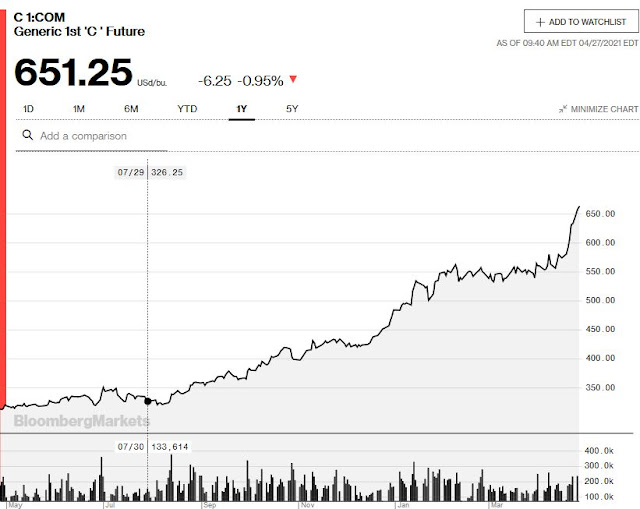 From under $3.50 a bushel last year at this time to almost $7.00.
So what, you might be asking. I don't eat that much corn.
The thing is, this isn't the corn you eat, not directly. This is field corn and it is the main ingredient in feed for all the critters you eat: hogs, cattle, chickens. It is also a significant component of many non-meat foods you eat. Look in your pantry at your food and see how many list some variation of corn syrup in the ingredient list. You will be surprised. It is also the main ingredient for lots of dog foods. Purina Dog Chow, maybe the best selling dog food in America, has corn as the first and third highest percentage ingredients. Other than water, high fructose corn syrup is the main ingredient in most pop, especially the colas. You eat lots of corn.
In other words, while you can't go out into a field of corn and eat the corn on the stalk, that corn is processed into most other food you buy. Soybeans are doing the same thing and they also make up a lot of your meat and processed foods. Wheat is up but not as much as corn and soybeans.
Russia is temporarily halting exports of some food products in response to surging food prices, although they are still shipping a lot of wheat. Bolivia, a major beef producer, is halting exports of beef as well to make sure they have adequate supplies for their own country.
What all this means is that food prices are headed up and a lot. My wife was at the store and remarked that ground beef prices are already up significantly. Other foods will follow. A quarter here, $.50 there and pretty soon your shopping cart of groceries costs a lot more than it did in 2019.
One of the major factors that has kept our society mostly stable for hundreds of years is food security. Most people in America and the West, the overwhelming majority, have plenty of food and for most of us we have too much food, something fairly unique in human history. But food insecurity can lead to widespread social problems. If your wireless internet isn't as fast as your kids want, they might whine. If you don't have enough food to feed them? You will do whatever you have to do in order to feed them.
Increased food prices will lead to demands for more food stamps to buy lobster increased food assistance for the poor, meaning more money whipped up from thin air. More food stamp money means less downward pressure on prices which means those food prices can keep climbing which will lead to demands for more food assistance. Rinse. Repeat.
More people are talking about inflation than at any time I can remember since that dipshit Jimmy Carter was President. The method of tempering inflation we are supposed to have would be to raise interest rates but doing that would crater a lot of the fragile economy and drastically increase the amount of interest owed on the national "debt". That only leaves some pretty drastic and catastrophic measures on the one hand or on the other hand letting inflation run out of control.
Welcome to Zimbabwe 2.0.
Posted by Arthur Sido at 10:30 AM