The nation is collectively holding our breath waiting for the outcome of the Chauvin trial. While it certainly seems like a slam dunk for the defense, it is not difficult to imagine that the jury could vote to convict out of fear of what will certainly happen if he is not found guilty. Closing arguments are today and the case could go to the jury as soon as this afternoon.
Meanwhile the news is just chock full of good stuff.
A mass shooting in Kenosha, Wisconsin at a tavern with three dead and three wounded.
The sheriff's department previously said the shooting appeared to be a "targeted and isolated incident." The suspect was described as a black male over six feet tall wearing a light-colored hooded sweatshirt.
Other reports say there was an "altercation", the suspect left and then came back and started shooting. That is how a pretty significant percentage of American mass shootings start.
In Columbus, Ohio a mass shooting that wounded five and killed one, a black woman named LaToya Renee Carpenter who was just in her car driving by. A dark sedan shot into a crowd holding a memorial service at a strip mall for a different black guy, Jarrin Hickman, killed last year by yet another black guy, Varmunyah Dunor, in a drug deal gone wrong. Columbus is having an exciting year:
In Columbus, two more people were killed Sunday morning in separate shooting incidents in South Linden and on the Hilltop, bringing the total homicides committed in the city this year to 60. It's a benchmark not reached until July 2 last  year, the city's deadliest year on record with 176 homicides.
It isn't even summer yet! I lived in Columbus for a year when I was at Ohio State as a freshman and I don't remember any murders. I am sure there were some but not 60 by mid-April.
In Chicago a 7 year old black girl named Jaslyn was killed when she was hit multiple times by gunfire that seems to have been intended for her father, Jontae Adams. They were in line at McDonalds when two men got out of a car and fired into their vehicle. Police say it was "gang related", a euphemism for "black on black violence" and shortly after this shooting a man and woman were shot at a Popeyes while in the drive-thru in an apparently related shooting. Getting fast food in Chicago is dangerous and not just because the food is unhealthy. It was a pretty busy week in Chicago: 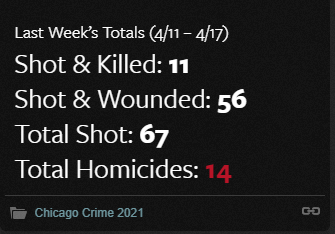 Two murders a day and the weather wasn't that great.
Meanwhile in Louisiana, a mass shooting in LaPlace at a child's birthday party. No description of the suspects but given the circumstances, "multiple people were shot when verbal confrontations during a child’s birthday party led to gunfire", and LaPlace being 50% black, it is probably a safe bet who was shooting and who was shot.
Then we have a manhunt going on a for a black ex-cop who already was in trouble for allegedly raping a 16 year old girl and is now believed to have executed 3 people, another black man and two mestizo women. He is on the run and it is thought that he might have hostages.
In other words, just another weekend in America's diverse utopia.
This is why I am not really that concerned about gun control. The cops can't even control the cities, you think they are going to come stumbling around rural America where people know a) how to shoot and b) how to dig a hole?
The Lugenpresse is trying to keep a lid on this outbreak of widespread diverse violence but they are losing control of the narrative. This country is at a boiling point and what happens in Minneapolis this week could kick off something huge and ugly, and I don't mean Lena Dunham.
Posted by Arthur Sido at 9:41 AM