Watch and weep at what has become of our country:
This is what thousands of young American men died to protect last century? This is their legacy?
The U.S. military was once a bastion for masculinity. We didn't pretend that women could do the same things as men and more importantly we didn't think that they should. We told young men to pick up a rifle and kill our enemies. Now we seem more concerned with cramming as many degenerates and women into the service as possible. Can you imagine George Patton staring stupidly into a camera and talking about the importance of diversity and inclusion?
Granted, the U.S. has a huge technological edge over Russia (and China) and I really suspect a lot of the new Russian high tech weaponry is just bullshit but if you took a dozen enlisted personnel selected at random from the U.S. Army and put them in a Thunderdome against a dozen randomly selected Russian grunts, who do you suppose would win?
Meanwhile the top brass in the military including diversity hire Secretary of Defense Lloyd Austin have made a priority of stamping out "extremism" in the military: Leaked Document Shows Who the Pentagon Wants to Purge from Military
Extremism in this case, as always, is code for "White guys that aren't faggots". They are focused on "hate symbols" like Pepe and the OK sign. Really. 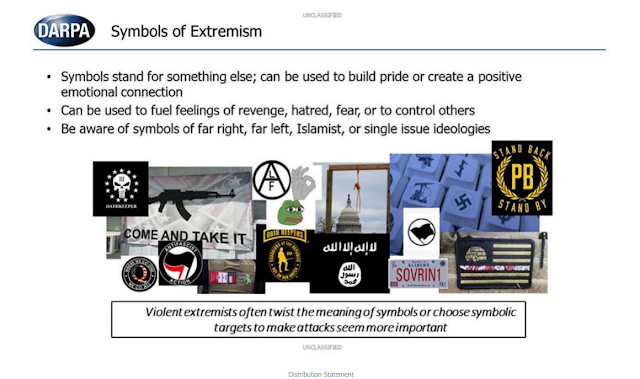 Included in their "danger signs" is being a pro-life Christian or someone who doesn't embrace homosexuality and feminism. Apparently the dominant religion in American history and the faith of the vast majority of American soldiers, sailors and Marines is now a sign of potential "extremism". That should be great for driving out of the military the men who have made up the bulk of the military for generations: patriotic White Christians from the South. Good luck fighting a war with gender confused lesbians.
Russia has little interest at this point in world conquest but hegemony over Europe and Asia? Yeah that seems clearly to be on their radar.
Russia and China are both looking to stamp out effeminate male behavior and replace it with the sort of rugged and brutal aspects that made it possible for the Soviets to stop the Third Reich and eventually push them back all the way to Berlin. The U.S. is filling the ranks with women, sodomites, trannies and soft, doughy looking losers.
The world's last remaining superpower is looking less than super but at least the troops look fabulous.
Posted by Arthur Sido at 10:14 AM