Speaking Of Idiots In Congress 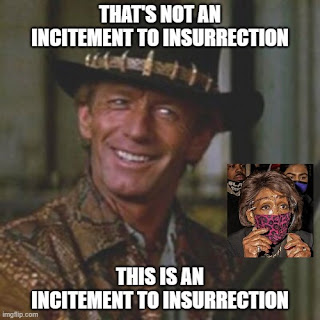 Ah the heady days of 1986 when Crocodile Dundee came out. You know it is an older movie because in this scene, two of the three would-be muggers are black. Today they would all be White guys and Dundee would be portrayed by a black trannie.
One of the dumbest human beings alive has once again opened her Crypt Keeper trap and said something that would get a White person arrested or impeached.
Maxine Waters tells Minnesota BLM protesters 'to get more confrontational' one day after violent anti-police clashes erupted across US 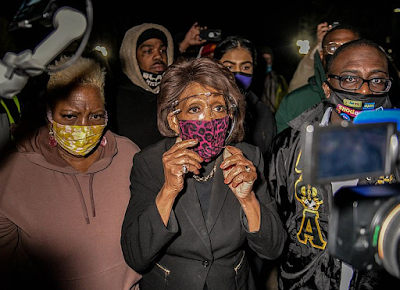 Of course she did. And of course they will. Last night they were "protesting" in front of the home of Pete Orput, the attorney for Washington County.... 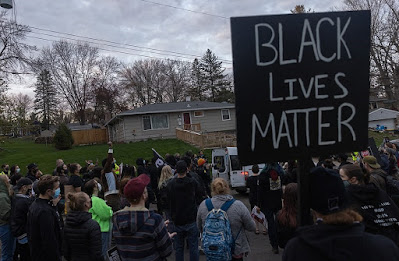 Orput filed charges against Kim Potter who accidently shot violent criminal Duante Wright with her Glock instead of a taser and I guess these legal scholars are mad that she wasn't summarily executed. Speaking of actual armed insurrectionists... 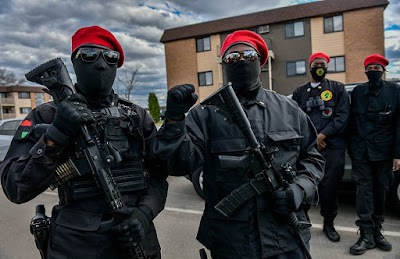 The violent Marxist black Panthers are back on the prowl standing in front of the Brooklyn Center police station with AR-15s that look like they have never been shot. The whole kit for both guys looks fresh out of the box. Remember that we are told that black men are automatically gunned down if they "protest" while carrying firearms.
So calls for violence. Armed thugs on the streets. Actual violence taking place. After January 6th Trump was "impeached" because some people entered the U.S. Capitol and a cop shot an unarmed White woman because it was claimed he "incited" violence but Maxine Waters goes into an already inflamed situation and throws gas on the fire and not a damn thing will happen to her.
White privilege means being treated like second class citizens in the country we built.
Posted by Arthur Sido at 9:18 AM