Lots of people think Ben Shapiro is like super smart cuz he totally owns da libs on college campuses and if outsmarting a 19 year old girl who has never had to engage in critical thought isn't a sign of being super smart and stuff, what is? 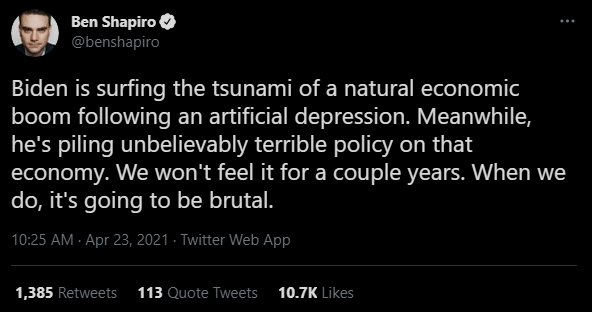 A "natural economic boom"? What "booming" we have going on is driven by a firehose of fake money. Even during the Trump years, the national debt was exploding.

The "economy" is driven mostly by consumption and that consumption is mostly driven by imaginary "money". Shapiro here trying to own the libs by apparently not understanding basic economics.
Then there is this guy: 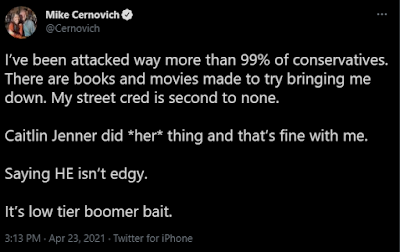 Delusions of grandeur. An overly inflated sense of importance. Paranoia.
Cernovich is wandering into cult leader levels of insanity here. They are all out to get him, making movies about him but he totally has street cred. Oh, and he thinks Bruce Jenner changing his name and wearing a dress makes him a woman. I have always found him cringe but lately he is going completely insane.
It isn't bad enough that most "conservatives" are shills and grifters, but they are also incredibly dumb. Stop supporting these people and stop taking them seriously. This is all a hustle to them.
Posted by Arthur Sido at 10:46 PM