Race Hustling Is Their Business...And Business Is Good

In the Soviet Union, top party nomenklatura had all manner of perks from chauffeured cars that ran in private lanes to vacation homes called dachas where they could relax from a busy week of ordering summary executions. Far from an egalitarian society where everyone was on equal footing, Communism places people in a caste system where the top officials had the best of everything and the vast majority of the workers lived in extreme poverty. It was a pretty good system, if you were in the nomenklatura or were a party apparatchik.
In the United States, our own wannabe номенклату́ра have clearly figured out how this whole thing works. In 2019 liberal hero Barack Obama and his "wife" purchased a $15 million Martha's Vineyard estate in a zip code that 93% White and less than 2% black. Of course our most famous socialist, Comrade Bernie Sanders, has been regularly pilloried for being a multi-millionaire socialist who owns at least three homes. Most of the loudest voices on the Left are filthy rich.
Now along comes black Lives Matter co-founder Patrisse Khan-Cullors, a carpet muching Commie who admits she is steeped in Marxist training, showing that race hustling is a cash printing machine.....
Marxist BLM leader buys $1.4 million home in ritzy LA enclave
Patrisse Khan-Cullors, the leader of Black Lives Matter and a self-described Marxist, recently purchased a $1.4 million home in an exclusive Los Angeles neighborhood where the vast majority of residents are White, according to reports.
"Vast majority" meaning the area is 88% White.
Why would a Marxist who claims to be all about black lives want to buy a $1.4 million home in an 88% percent (88 you say?) White neighborhood instead of living in one of the predominantly black neighborhoods in L.A.? Like Compton or elsewhere in South Central L.A.?
The reason is simple. She doesn't give a shit about black lives and prefers to not be around blacks, but she has discovered that race hustling is a great way to avoid having to be gainfully employed and it pays loads of money (see also: Jesse Jackson, Al Sharpton, Shaun King, pretty much all black clergy...). In fact if I were a cynical person I might think that she doesn't even want to see black lives getting better because then she might have to get a job, something I would imagine she is woefully ill equipped to do.
Always remember, it is all a hustle. 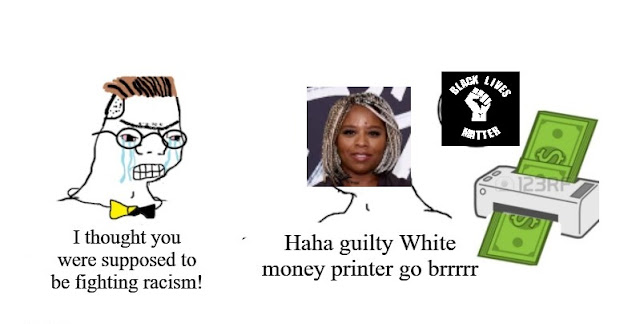