On Monday I mentioned the death of a 7 year old black girl named Jaslyn who was in a car at a McDonalds drive-thru. A man was just charged in her killing, one Marion Lewis, an 18 year old black man. 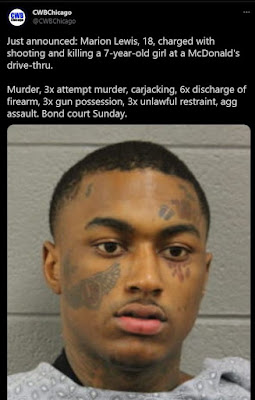 Nice face tats. I especially liked this one:

Aw how sweet, he has little feet tattooed on his face and yet he shot into a car with a 7 year old little girl.
At 18 years old he is barely but still legally an adult. With murder plus a slew of other charges, he looks to be going away for most of the rest of his life. How many millions of dollars will this guy cost the taxpayers until he finally dies in prison? Hopefully as a child killer some actual badass in the slammer will open him up from top to bottom and let him bleed out.
Posted by Arthur Sido at 5:29 PM