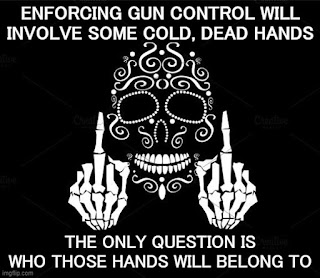 During Biden's painful to watch announcement of his unconstitutional infringements on the 2nd Amendment yesterday there was very little of real interest. The White House revealed everything he would be covering ahead of time in case he wandered off mid-speech so nothing was new, not even his deteriorating mental and physical condition which everyone is already aware of. However one line stood out, although I am sure Biden didn't notice it because he didn't write the speech and barely made it through the whole thing. From the official White House transcript:
We got a long way to go.  It always seems like we always have a long way to go.  But I also — today, we’re taking steps to confront not just the gun crisis, but what is actually a public health crisis.
The key phrase there is "public health crisis".
With the Chinese bioweapon called coronavirus or Covid-19, we saw the government start to make the argument that basic civil liberties may be ignored in the name of "public health". I pointed this out in January in my post Gulags Are A Go reporting on New York Assembly Bill A416 that would give the state of New York and any number of petty bureaucrats the ability to lock people up in quarantine without recourse. That bill is still in committee and likely won't pass now but it is instructive to see that the government uses the language of "public health crisis" to get around the normal prohibitions. I also noted that this language is being used to try to censor free speech in Free Speech Is Cancelled by declaring "racism" to be a "public health crisis" that justifies unlawful censoring of political speech.
Now we see the same language being used to infringe on our 2nd Amendment rights as well as our 4th Amendment right to due process via "red flag laws". The people pulling Biden's strings are pretty clever to do it this way, a significant percentage of Americans will do anything you tell them to do in the name of "staying safe" and especially if it involves a "public health crisis". Having the media obfuscate the issue by clamoring about "White supremacist domestic terrorism" while ignoring the vast majority of gun violence certainly aids their cause.
Look for this language to be repeated by the Biden administration as well as the media. We are in a knock down, drag out fight to the death here and every major institution in America is against us. I would also recommend sharing this video from Mr. Gunsngear to your Fudd family and friends who don't understand what is really going on....
This is no time to relax, things are only going to heat up from here.
Posted by Arthur Sido at 10:31 AM