Remember Brian Sicknick, the Capitol police officer ruthlessly killed by "insurrectionists" on January 6th? He was a national hero slain by the followers of Orange Man Bad, honored in the Capitol rotunda. The media told us he was struck by a fire extinguisher and that he "succumbed to his injuries" when he died at 10 PM the evening of the 6th. His death was used in the "impeachment" of President Trump.
The only problem?
None of that was true.
Capitol Police officer Brian Sicknick died of natural causes after Jan. 6 riot, examiner says
U.S. Capitol Police officer Brian Sicknick suffered two strokes and died of natural causes the day after he confronted rioters during the Jan. 6 insurrection, according to Washington's top medical examiner.
The chief medical examiner, Francisco Diaz, said Monday that an autopsy of Sicknick found no evidence the 42-year-old suffered an allergic reaction to chemical irritants. Diaz ruled the Sicknick, 42, died from "acute brainstem and cerebellar infarcts due to acute basilar artery thrombosis."
He had a couple of strokes. The stress of that day "contributed" to the strokes but being in a scuffle doesn't cause a stroke. In other words he wasn't killed by the rioters, he died of natural causes. Still sad but not criminal. Three other people died from natural causes that day and the only person who didn't die of natural causes was Trump supporter Ashli Babbitt, a White woman shot while climbing through a window by a black Capitol Police Lieutenant who has still not been named, much less charged. Based on his awesome trigger discipline, it was only a matter of time before he killed someone. 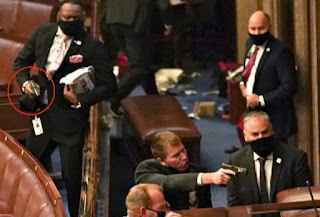 Notice the White cop has his finger off the trigger while the black cop has his finger wrapped around  the trigger with the muzzle of his handgun pointing at the back of the other capitol cops.
Months later the media is quietly retracting their lies but the rabid Left (but I repeat myself) will still continue to repeat the "violent, armed insurrection" narrative.
Imagine if black Lives Matter had stormed the Capitol and a black woman was shot by a White cop. They would go ballistic. There would be Congressional hearings and the elites would be rending their garments. The cop would be named, he would have been arrested and charged with murder and his family would be in danger. A White woman shot by a black cop and no one cares. That is what White privilege means.
Kind of like the Russian bounties on U.S. soldiers in Afghanistan thing used against Trump in the campaign. The media told us that the Russians were paying Afghans bounties for killing U.S. soldiers and Trump was told about it and didn't do anything. Oh, that was a lie too.
US intel backpedals on Russian bounty story that Trump called a 'hoax'
A senior Biden administration official said the intelligence community only had "low to moderate" confidence in the Russian bounty story, meaning it is unproven and possibly untrue.
The revelation came just as President Biden declared the Russia threat a "national emergency" and slapped new sanctions on Russian officials. The sanctions had been a result of meddling in the 2020 election, Russia's alleged role in the SolarWinds hack and the poisoning of Kremlin critic Alexei Navalny.
"The United States intelligence community assesses with low to moderate confidence that Russian intelligence officers sought to encourage Taliban attacks against U.S. and coalition personnel in Afghanistan in 2019, and perhaps earlier, including through financial incentives and compensation," the official said.
"Low to moderate" is government talk for "It was all bullshit, we made it up and we aren't sorry".
Nothing they are telling you is true. Some of it might be based in truth but it is all twisted by these pieces of trash wearing suits and muttering soothing lies into the camera. They are the enemy of the American people and they know full well that they are lying and think their lies make them noble.
Soon it will be time to show them the error of that opinion.
Posted by Arthur Sido at 8:37 AM