More Adventures In Libertarians Being Dumb

From the official Facebook page of the Libertarian Party... 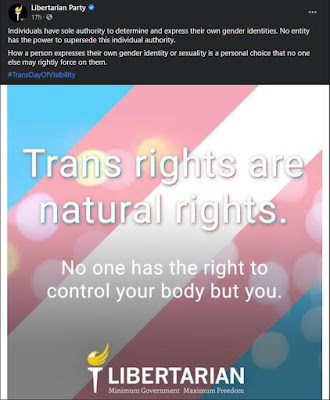 Every man (or trannie) for himself demands for absolute individualism is poison to a society.
I really can't understand why what little respect libertarians once had is disappearing down the toilet. As far as I can tell, no one is telling men who want to wear panties that they can't, just that they can't hang round in girl's locker rooms or play girl's sports and especially that they can't demand that I pretend they are a girl with a moose knuckle in their lacy underclothing.
Men like Hans-Hermann Hoppe and Ludwig von Mises weren't right on everything but at least they demanded you take them seriously. Today's libertarians, from Gary Johnson to Spike Cohen and Jo Jorgensen are about as serious as Carrot Top and the entire national movement seems hellbent on destroying the one mildly respectable third party in American politics. It almost seems like they are doing it intentionally. Even still there are millions of libertarians and clown world crap like this is helping to push them down the road into the real right-wing.
Welcome to the real right fellow travelers!
Posted by Arthur Sido at 7:22 AM