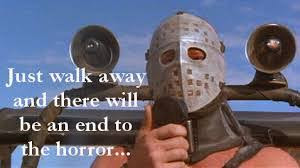 Ramzpaul gets on board: get out of the cities....
That is really it. There is no place for you there. In most cities you can't arm yourself for protection so you are a sitting duck for packs of ferals. I don't care how much of a badass you think you are, if you are outnumbered 4-1 and get sucker punched, you are going to get beat down. You aren't Jack Reacher, able to beat up a dozen men single-handed. If you do defend yourself, even if it is clearly self-defense, you are likely to get arrested and you might even go to jail.
His anecdote early in the video was something a lot of White people have experienced. When my wife was younger, she and another White girl were in Columbus, Ohio and minding their own business when they were accosted by a couple of black girls. There was no reason for it other than pure hatred.

To paraphrase London mayor Sadiq Khan, it is part and parcel of living in a diverse country. I doubt there are many of us who have not experienced the glaring and glowering from packs of blacks. While Hollywood would have you believe that blacks in rural areas are rightly in terror of White people, that just isn't the case and never has been in my lifetime. The opposite is true, most White people who live near a city know there are places in that city where you just don't go, or in the case of Detroit you just don't go at all.
Get out. We really are at that point I have been warning about since the 2016 election. We are slightly warmer weather and one questionable police shooting away from an explosion.
Posted by Arthur Sido at 7:05 AM