Is That Why We Fail?

On /ourside/, being doxxed is a very real threat. If you are saying things outside of the elitist mandated Overton Window, you risk losing your job like Lt. William Kelly, a cop in Norfolk, Virginia who donated $25 to the defense fund for political prisoner Kyle Rittenhouse and was fired. I assume he will sue the crap out of the department and get his job back or at least a significant settlement but the chilling effect is real. The political speech representing the beliefs of half of America is now grounds for termination. I could never work in the corporate world again, my public statements on any given day would cause a recruiter for globo-homo to run to the fainting couch.
It doesn't stop with losing your job. Your family can cut you off. You can lose access to social media and internet platforms. Your ability to use banking services can be limited. Even that is not all there is. To the Left your family is fair game and in many ways is the preferred target. Many, if not most, of us are usually armed for self-defense, are familiar with the use of our preferred firearms and have trained to some extent. We are not a soft target. Of course we are susceptible to being sucker punched or something but with a modicum of warning we are prepared to defend ourselves. Our families? Not as much, especially if we aren't around. We can't always be there. We all have to sleep. Most of us have extended family living in other areas who may not even be on board with what we believe. It doesn't matter because terrorizing the weak and defenseless is a favored tactic of the Left. Every Marxist regime that has ever existed kept control of the population not by delivering their promises of a workers utopia but through terror, torture and murder. Their contemporary progeny thinks throwing a Molotov cocktail into your house while your children sleep is perfectly acceptable behavior.
Even though I don't shroud my identity behind anonymity, I don't get much in the way of threats. Perhaps because of that, you can't shut me up by revealing my real name as I use it openly. But it happens to others on a regular basis. No matter how anonymous you think you are, if you are on the internet someone can figure out who you really are and that can put your family at risk.
Big Country Expat had an experience in this area just recently that he talks about here: A Busy Saturday (and now it's Sunday) Bottom line, someone called his mom and was asking questions about him. That obviously pissed him off and upset his wife and that is what these people want. They love to try to frighten people into silence. Obviously BCE being BCE, this is having the opposite effect but many others are cowed into silence out of fear.
It is hard for us to understand. My perspective is that the last thing I want is for the Left to shut up. If they would just quietly do their work behind the scenes, they would be in a much better position but these shitbags can't help themselves, they have to announce their plans and crow over every little victory and that is waking people up. The more they talk, the better. Even more difficult to understand is the threatening of people's families. There are a ton of repulsive Leftists and plenty I would have no problem punching in the mouth but their kids? I can't even comprehend threatening someone's children because I don't like their politics. Kids are off limits. If some soyboy dude wants to square off with me, let's get it on, but I wouldn't go after his significant other because that is fucking cowardly.
But it BCE's post got me thinking. Is this why we lose so often, and why we are on the verge of losing it all? 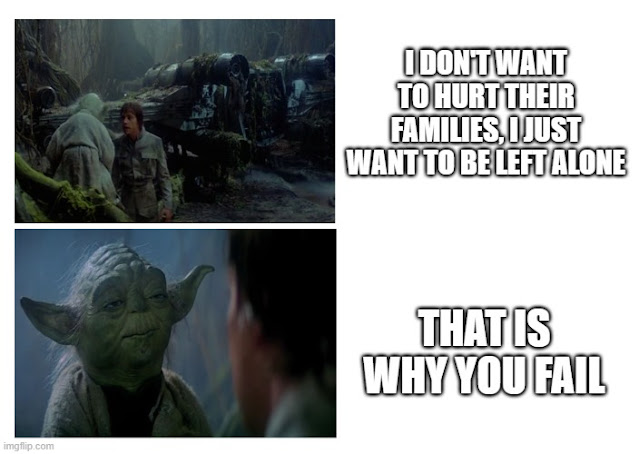 Back in WW II, the "good guys" had no problem firebombing cities like Dresden and Tokyo, or dropping nukes on the Japs. We burned to death untold tens of thousands of women and children. If the Axis had somehow turned things around and won the war, Eisenhower, Truman and Churchill would have been tried as war criminals, found guilty and hung. Rightly so. Firebombing Dresden and other cities in Germany and Japan were acts of terror to break the will of the Germans and Japs.
Are we too squeamish today? Are we too soft to wage total war?
I am not at that point, not yet, nor am I close to that place. I don't want to become like our enemy. However I know this for sure. If our commitment, our zeal doesn't match that of our enemies we will lose. Our understanding of the rules and what are we obligated to obey needs to change. I talked about this a couple of years ago in Fighting In A Cage Using The Queensberry Rules.
"But by lowering yourself to fighting by their rules, you become what you hate! If we don't keep our principles we are no better than the Left!"
When you are in a fight for survival, all that matters is survival. If someone is threatening me or my family I am not going to challenge them to a "walk 10 paces turn and fire" style duel. To protect my family I will fight as dirty as I need to fight in order for them to survive. I'll shoot an intruder in the back if I have to. I won't feel much better standing at the graveside of my child by consoling myself with the knowledge that at least I played by the rules.
That is even more true today. In March of 2019 even a pessimist realist like me didn't see what was coming in 2020 and how swiftly things would go sideways.
We must be ready to do what must be done before what the Left thinks must be done happens to us. All the nice rules about discourse and debate are garbage today and we can't fight a war restricted by rules imposed on us by our enemies, rules they cheerfully ignore and flaunt. The kindler, gentler days of Quisling Republicans like George W. Bush and Mitt Romney are over. Today we need to be channeling Genghis Khan and George Patton.
Their motto is "By Any Means Necessary". If we don't operate the same way, we will lose. 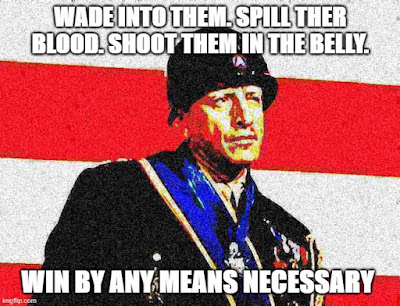