Yet another gun control proposal making it more expensive for Americans to exercise their 2nd Amendment rights. Along with the Biden admin proposing to turn brace stabilized pistols in short barreled rifles and requiring an NFA tax, along comes Jamie Raskin, a Democrat from Maryland who wants to increase the NFA tax 50%, from $200 to $300.....

Noting that the tax amounts in the NFA, established in 1934, have not changed since enacted – for instance, $200 in 1934 would be the equivalent of $3,925 in 2021 – Raskin's proposal would immediately bump the rates by 50 percent. This would make the basic $200 tax stamps on most NFA transfers $300 moving forward. After that, the rate would increase in line annually with the federal cost-of-living adjustment.
The article suggests that could be a enormous amount of tax revenue:
With an estimated 10 to 40 million stabilizing braces and similar components in the hands of otherwise law-abiding gun owners, Raskin's move could theoretically see a fantastic $8 billion gleaned from the wallets of compliant Americans for items they already legally own.
The problem with that number is that you can make the NFA tax a million bucks and it won't matter because we aren't going to pay it. Here is Raskin... 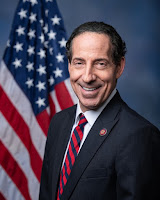 You might be surprised to find that he belongs to an ethnic tribe that often tends to be behind this sort of anti-American behavior. Or maybe you won't be surprised.
Be warned, this little by little death by a thousand cuts tactic is far more dangerous than an outright ban that would be challenged and likely overturned by the courts. If you can make it too hard to own, purchase or manufacture firearms, it starts to accomplish your goal without scaring the NormieCon Fudds too much.
Sneaky bastards.
Posted by Arthur Sido at 3:19 PM