Regarding the mass shooting in Indianapolis at the Fed Ex depot, this morning I said:
The critical thing to watch will be the identity of the shooter, the longer they withhold that, the less likely it is to be a White guy.
It is 2:30 PM in Indiana, still no word on the identity of the shooter. Also we are seeing stuff like this from the local Indy paper and also from other national news sources: 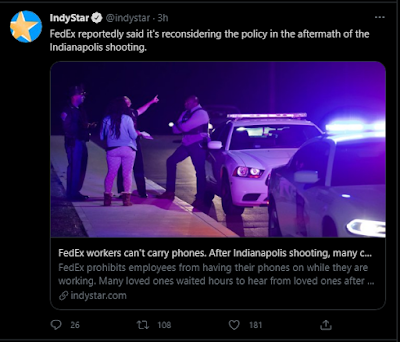 Several stories focused on the FedEx policy of not allowing phones when you are on the clock because everyone knows that if you have a cell phone you are likely to be staring at it instead of working when you are on the clock.
Anyway, still watching and waiting but the closer we get to the 24 hour mark with no ID, the less likely this is some White guy who snapped and the more likely it is a diverse person angry at his co-workers.
Posted by Arthur Sido at 2:43 PM