A Perfect Storm Of Stupid 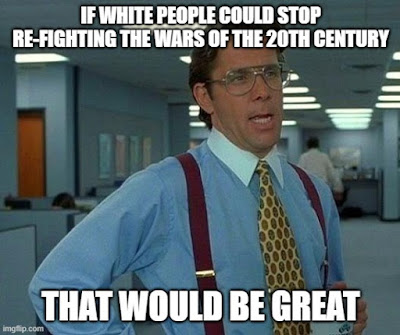 I had high hopes that the Slavic people, in other words my people, would finally stop squabbling with each other over last century's conflicts. It appears I was overly optimistic.
Russia Warns NATO Against Sending Any Troops To Ukraine As "Frightening" Escalation Looms
While I get the bad blood, especially since the Russians starved to death and enslaved millions of Ukrainians last century, the fact is that the greater threat to the Slavic people and Eastern Europe are the globalists who have destroyed Western Europe, are doing the same to the U.S. and will be turning their sights on Eastern Europe soon enough. Poland and Hungary are already on the globalist shit-list and of course "Russia, Russia, Russia!" has been all we have heard for the last five years.
Of course the U.S. under The Usurper Joe is all over this, and I wonder if Ukraine understands they are being put in the role of getting hammered by Russia to appease the U.S. neocon population who still hates the Russians because of their Jewish tribal memories. Former Vice President Joe Biden's rainbow coalition team of sexual degenerates, Jews and multi-hued losers are the worse possible people to broker any sort of peaceful resolution, and just as clearly they would love this to turn into a full scale war.
It is hard to get any decent reporting on what is going on, and I am open to suggestions, as most of the news either paints Russia as the worst people in the world or Russian partisans like The Saker declare that Russia cannot and never has done anything wrong.
Either way, it isn't our fight and we should stay the hell out of it but I assume that Ukraine didn't give Hunter Biden all of that money and not expect the U.S. under his daddy to come and intervene in this brewing regional war.
Posted by Arthur Sido at 6:40 PM