We Will Find Out How Bad It Really Is

We all know it is bad and getting worse but we might get a sneak preview of just how bad it is very soon. The Derek Chauvin trial is starting in the death of George Floyd and how it shakes out will have repercussions no matter what the outcome. 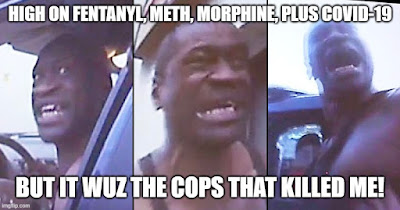 Almost anyone you talk to will at a minimum have seen still photos of Officer Chauvin kneeling on George Floyd's back/neck. Most people will have seen at least parts of the video, if not the parts where Floyd is acting crazy and resisting arrest. They are having a tough time picking jurors who aren't predisposed one way or the other, on the first day of jury selection they only ended up with three jurors, two White guys and a "woman of color" who declared herself excited to be on the jury. Excited to spend weeks hearing endless arguments about toxicology and use of force guidelines? I am guessing she sees dollar signs from being able to sell her story of oppression on the jury or some crap like that. The two White guys include a chemist, so what I bring up next should be interesting, and an auditor who might be less likely to be swayed by the emotionalism of the prosecution and more interested in the hard data.
Under normal circumstances this seems like a pretty basic slam-dunk for the defense. Chauvin used a technique to restrain Floyd that they were apparently trained on by the department and Floyd had more drugs in him than a Walgreens. This is the relevant section of the report by Hennepin County medical examiner who performed an examination of Floyd's corpse (click to enlarge): 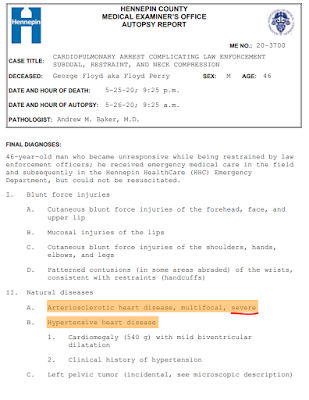 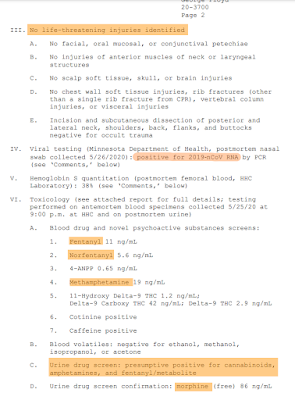 (Screenshots from the Hennepin County medical report, accessed and screenshot by author on 3/10/2021)
tl:dr George Floyd had "severe" arteriosclerotic heart disease as well as hypertensive heart disease, he was positive for the Chinese coronavirus and he had enough fentanyl, meth and morphine in his system to kill a normal person. Floyd was on his way out, having to be restrained while resisting arrest after trying to pass a counterfeit bill just hastened the inevitable.
The defense case is simple: Floyd was hopped up on a lethal dose of drugs, had heart disease and Covid-19 and died as a result of resisting arrest while officers were restraining him using department approved and trained techniques.
Like I said, it should be easy as pie to get a not guilty verdict. But this is also 2021. The Minnesota National Guard is preparing to try to deal with the inevitable riots if Chauvin is rightly found not guilty. Others who watched the jury selection noted potential jurors who were frightened for their safety if asked to serve, knowing that in the event of a not guilty verdict they could very well be the target of violent reprisals. There will be a great deal of pressure to find Chauvin guilty regardless of the evidence because of the memory of last years riots that caused so much violence, mayhem and destruction.
If Chauvin gets the James Fields treatment, it will be a sure sign that things are getting worse faster than expected. Ironically a not guilty verdict and the subsequent riots will actually be a good sign in a perverse way. We are also looking at the trials of Kyle Rittenhouse and the Ahmaud Arbery case coming up. That adds up to lots of sparks in some already bone dry tinder.
Posted by Arthur Sido at 9:30 AM