On September 11th, a handful of goat humpers managed to seize a few airplanes and fly them into the World Trade Center and the Pentagon, killing thousands of Americans. It was a horrific terror attack by Muslims that dwarfed anything prior or since. A big reason they succeeded that isn't well known is that prior to 9/11 it was generally the policy of pilots to simply comply with hijackers orders as they would usually demand to be flown somewhere and be dealt with on the ground. Turning the planes into weapons was a fairly new tactic.
Stopping attacks like this was pretty simple. Fortified and locked cabin doors would keep terrorists from accessing the cockpit. Even easier would be to stop importing Muslims into our country. It would have carried a cost that airlines would have to eat but it would have been pretty easy. But we didn't do that.
Instead we completely revamped the way we travel, subjecting White businessman and elderly women and children in wheelchairs to humiliating and invasive searches. A whole new agency, the TSA, was formed providing employment opportunities for weirdos who like patting down strangers. The Department of Homeland Security was formed, a new umbrella group to coordinate violating our civil rights. New laws were passed under the guise of "Patriotism" to allow the government sweeping new abilities to spy on Americans. We began to permanently house hundreds of suspected terrorists at Guantanamo Bay where we now have no way to get rid of them. We launched a war and occupation in Afghanistan that is approaching it's 20th anniversary with at least 2500 American troops still in the country, and now rumors are swirling yet again of a "power sharing" arrangement with the Taliban. Once the U.S. forces leave, the Taliban will assume power almost immediately and the whole two decades will have been just an expensive mistake. To compound the error of occupying Afghanistan for 20 years, we also launched a preemptive war and occupation of Iraq that created a power vacuum, immense bloodshed in that nation for years and the rise of ISIS.
Basically our elected "leaders" took a terrible situation and made it worse.
Fast forward to today. In January a group of protesters entered the U.S. Capitol. They brawled with police a little, they did a little damage and stole some stuff in a move akin to a panty raid and one woman was murdered by Capitol police. It was dumb and didn't accomplish anything but it was very minor. After all, the Capitol is a public building and these were members of the public.
The response has been similarly disproportionate.
To hear members of the Democrat party and the media (but I repeat myself), this was an "armed insurrection", minus any actual arms, signifying a new rise of "White supremacist domestic terrorism". Domestic terrorism from out of shape, unarmed LARPers is now considered the gravest threat facing the United States. A huge and ridiculous military presence was in D.C. to "protect" the inauguration of the Usurper Joe, despite no one showing up either for or against him. Now we are seeing that the militarization of D.C. might be permanent. From Military.com.... 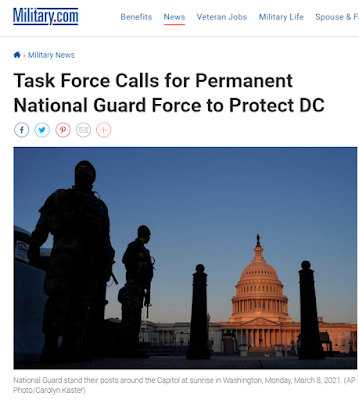 This will be the new normal, a militarized D.C. to protect the court mandarins and oligarchs from the unwashed masses. What is worse is that will likely begin to spread once the precedent is set and other cities will start to have permanent standing armed forces in place to defend against the phantom menace of "White supremacy".
Stolen elections. The armed forces occupying our capital. Figurehead leaders being manipulated by a globalist cabal. It is time for Americans to realize this:
We are in a banana republic ruled by an illegitimate occupying government.
This is the world we are living in. Make your plans accordingly.
Posted by Arthur Sido at 3:48 PM