The False Flag Must Be Getting Closer

The crack outfit known as the Capitol Police, under the stalwart and wise leadership of Acting Capitol Police Chief Yogananda D. Pittman, is as diligent as ever for threats, real and imaginary!
Capitol Police increase security amid 'possible' militia group plot to breach Capitol
U.S. Capitol Police are increasing security after obtaining intelligence to suggest a "possible plot" by a militia group to breach the U.S. Capitol on Thursday, March 4.
"The United States Capitol Police Department is aware of and prepared for any potential threats towards members of Congress or towards the Capitol complex," they said in a statement Wednesday. "We have obtained intelligence that shows a possible plot to breach the Capitol by an identified militia group on Thursday, March 4."
Wow, that sounds super credible and serious and not at all like some vague bullshit! I am sure they are willing to back this up in their statement:
Due to the sensitive nature of this information, we cannot provide additional details at this time.
Oh. Well we can trust them, it isn't like the government would lie to us. Meanwhile it becomes more evident that the January 6th "insurrection" was akin to a panty raid.

I am not in a militia but if I were and I intended to "seize" the Capitol and stage an "insurrection", or even kill a few Congresscritters, I would probably recommend that we bring some of the hundreds of millions of our firearms with us instead of coming armed with nothing but a bison head. A few hundred guys could have easily smuggled in at least handguns or AR pistols or sawed off shotguns in cold weather. Something. Anything. Nope, just some people milling around and stealing some public property as a prank.
Again, if there were actual militia groups in America and if they actually had the intent of seizing the Capitol or wholesale executing Congressmen, they would have done so easily. Unarmed, disorganized protesters entered the Capitol and wandered around for hours, a small force of dedicated and armed men could have done much worse if they wanted to but no one wanted to do that. At least not yet.
Other than a ploy to increase funding, there is no reason to believe that there is a credible threat and it is quite plausible that the only purpose this announcement serves is to further embed the idea of dangerous right-wing militias poised to attack the government, thereby reinforcing the case for gun confiscation when the false flag attack does happen.
On the other hand, there is something to be said for the elected officials of this nation having a healthy concern about pissing off We The People.... 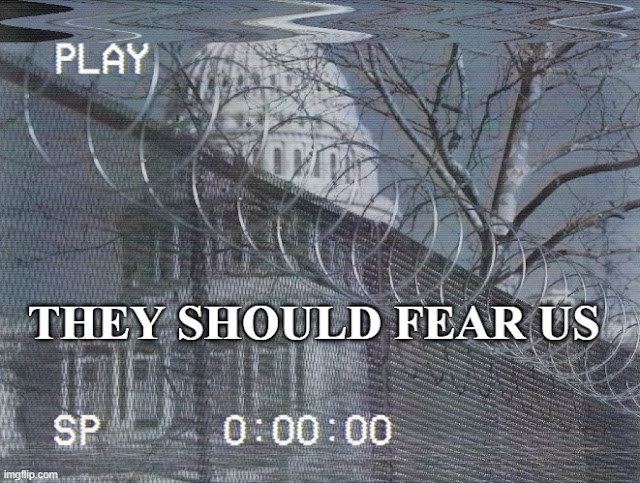