You probably have heard about this story, two black girls ages 13 and 15 carjacked an Uber Eats driver and drove off with him entangled in the car, killing him and then wrecking the vehicle. If you missed it, here is the raw video, it is very disturbing although not really shocking...

They murdered an Uber Eats driver in DC. pic.twitter.com/Zz7xOu0Piv

You have to appreciate the National "Guard" helping the carjacking girls while a man dies and the black girl being distraught not because she just murdered a man but because she left her phone in the car. The car she just stole. Not the man she murdered.
Anyway, along comes CNN and in an echo of Ilhan Omar's 911 "some people did something" language we get this.... 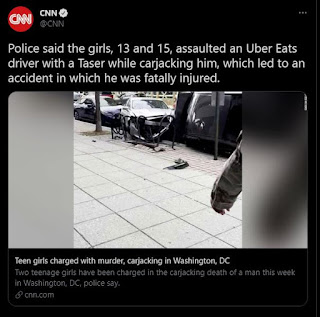 It makes it sound like there were two separate incidents. First some girls assaulted an Uber Eats driver, oh and then there was a completely unrelated accident in which a man was "fatally injured".
"Fatally injured" is what us poor, common folk call "murdered".
The real story is that there are a ton of young, feral teens, almost all of them black, who are carjacking and killing people all over the country but no one is talking about it because it makes them feel sad.
Some other hot takes. First from the Mayor of D.C., a little victim shaming.... 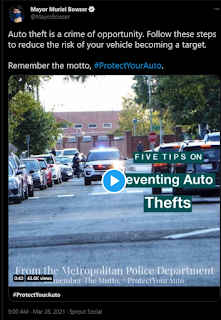 The video features some cheerful corporate background music while talking about how to keep black teens from driving off in your car, sometimes with you hanging on the vehicle until you suffer a "fatal injury". Reminder that D.C. wants to be a state.

D.C. is a 68 square mile swamp with 700,000 residents and the Metropolitan Police Department of the District of Columbia has 3,800 officers, the sixth largest police force in the country even though D.C. is only the 20th largest city in America. That works out to one cop for every 184 residents and 55 cops per square mile and they still can't keep teenaged black girls from murdering people.
Then race hustler Tariq Nasheed weighs in. This is the sort of racial solidarity that blacks have and Whites don't. Even when two black girls murder a man named Mohammad Anwar, Tariq has to turn this into an issue with White people..... 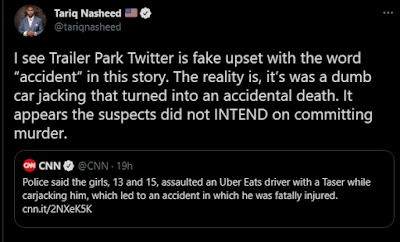 Apparently blacks don't even have agency in cases like this. They didn't mean to kill him. I guess that should comfort his family.
Our capital city with 55 cops per square mile and surrounded by some of the most expensive suburbs in America is an utter shithole when you get away from the monuments and museums. Not surprising when you consider that the city is over 50% black and that something like 8.5% of the residents of D.C. are ex-cons.
The Lügenpresse is having to work overtime to spin the news away from the reality of violent crime in America but more and more people are starting to see through it. As Ol' Remus always said, stay away from crowds and that means where possible stay away from cities. More on that in the next post.
Posted by Arthur Sido at 10:57 AM