Ask the average low information citizen and they will tell you the latest "stimulus" bill is about helping the American worker recover from the economic devastation wrought by the measures taken to combat the "pandemic". Of course that is not true, very little of the stimulus bill is directed at coronavirus relief. Case in point:

How does this advance the cause of "racial justice"? According to the story, it really doesn't....
The $1.9 trillion coronavirus stimulus package being pushed by President Biden puts more than $1 billion toward "socially disadvantaged" farmers and related groups — including an equity commission, agricultural training and other assistance to advance racial justice in farming.
"Socially disadvantaged" farmers are defined as those who are part of a group that has been discriminated against because of their race or ethnicity.
An equity commission? That should fix it. But there is more...
The provision would fund the development of agricultural legal centers and the distribution of grants and loans to help minority farmers.
Agricultural legal centers is code for lawyers who make their living suing people for racial grievances related to farming. I guess that helps black lawyers. But the loans part is the especially egregious section, screenshot taken directly by me from the House website: 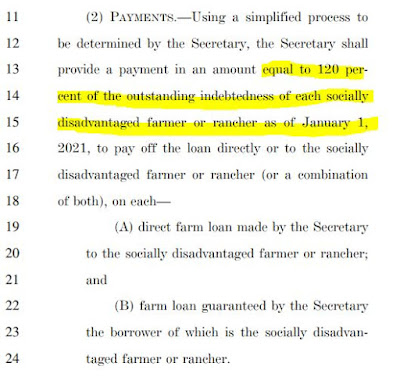 Not only do "disadvantaged farmers" get their loans paid off, they get a little extra. So if you are Sheeit'quarius the corn farmer in Alabama and you have a $100,000 loan, you get $120,000 to pay off the loan plus give you a little extra. Isn't that swell!
What if you are a White farmer, the kind of guy who has been feeding this country and the world since this country was founded, and you have a Farm Service Agency loan? Fuck you, you get nothing.
black farmers get their gubmint loan paid off, black lawyers get the backing of the Federal government to find "discrimination" and a bunch of smart blacks get to be involved in "training" and other bullshit, all paid for by the FedGov.
Keep in mind that less than 2% of farms in America are run by blacks. According to Bloomberg, as of 2019 at least 95% of American farms are run by Whites. The remaining 3% are mestizos or Asians. I already addressed the Incredible Shrinking Black farmer myth in my post Cory Booker's Plan To Turn America Into South Africa but in a nutshell, given the option of working on a farm or moving to the city and working in a factory, a ton of blacks chose the latter in the first half of the 20th century. You can't blame them, farming is hard work and very uncertain while a weekly paycheck at a factory is predictable. A huge percentage of White farmers also left farming behind and the total percentage of farmers relative to the general population has shrunk to unimaginable levels with each farmer feeding over 160 people.... 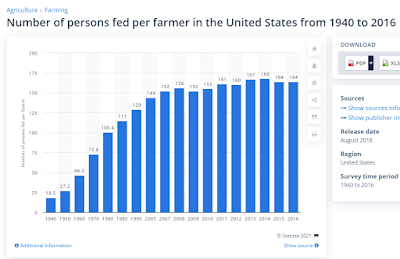 Compared to the subsistence level existence for almost all of humanity for almost all of human history, that is incredible.
However this great achievement of humanity, specifically White Europeans, is now considered to be oppressive and demands recompense for wrongs, real and imagined.
A common theme I keep returning to is the transformation of the government from a way to govern relationships between free people and into a weaponized means to shift assets from one group to another. This is just the beginning, it won't be long until every appropriation at the Federal and many states levels is contingent on racial identity. At the same time the people who have to pay for all of this are declining as a proportion of the population. Something will have to give at some point.
An illegitimate government allegedly run by The Usurper Joe Biden, a man who can't even remember where he is most of the time, that is forcibly seizing the fruit of the labors of Americans and handing them out like candy to bribe black and mestizo voters. The sooner the whole thing implodes, the better. 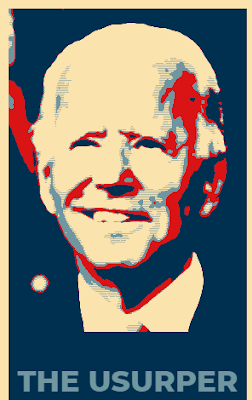