Speaking Of No One Coming To Save Us

Deep down, most of our people are reliant on one thing when it comes to protecting themselves and their family: the cops. Thin blue line, back the blue and all that. Look how many middle aged and old Whites have some sort of cop benevolent association sticker on their car. We have an instinctive trust and reliance on authority and cops are the visible symbol of social order and authority.

That reliance is misplaced and it is dangerous.
Please don't get me wrong, I have lots of cops who are customers and some that are friends. The ones I know around here are mostly good guys, dare I say even /ourguys/. If things kick off, they are going to be shooting the same people we will be shooting.
There are also lots of them that are power tripping assholes. Cops are people and like all people there are good cops, bad cops and everything in-between. My policy is pretty simple:
I back the blue when the blue backs me.
I have no obligation to respect or be deferential to a cop who is violating my Constitutional and natural rights. Same is true for the military. Follow your oath to defend the Constitution and we are good. Start following orders that violate the Constitution and you are no different to me than an occupying force.
In general most cops want to do their jobs and go home to their family after their shift and they have an ugly, awful job that I couldn't do without going Derek Chauvin on day one. In the last few years it has become increasingly difficult to do that without putting your job and even your freedom at risk. What cop in his right mind would get tangled up in a situation where he might have to pull his sidearm and shoot an African, something that will lead to death threats for him and his family at best and might lead to him being fired or even jailed at worst? Yes it is part of the job but the job isn't to rot in prison for trying to arrest a drug addled violent felon who dies of a heart attack.
My point being this: you can't rely on the cops to protect you or even to evenly apply the law. A recent incident got a lot of play in Portland, Oregon.

Breaking: #Antifa smash up a man’s truck at the Oregon state Capitol in Salem. He pulls out a gun and is arrested by responding police. #AntifaRiots pic.twitter.com/H4LTseLllo

They guy is being attacked, his property damaged and he was clearly in reasonable concern for his personal safety. The cops didn't arrest the antifa attackers, they detained the old and outnumbered White guy. They must have realized the optics were bad....

Update: Oregon State Police have released a statement clarifying that the armed man who had his truck vandalized by #antifa at the Capitol was the victim. He was detained, interviewed & released. He was not arrested or charged. He has a valid concealed handgun license. pic.twitter.com/VVrjvQ59TB

...but again their first impulse was to arrest a man who was being attacked.
Big Country Expat has a spicy take on this same subject: Question of Self Defense?
It depends a lot on where you live. In Portland the police are so cowed that they let antifa run roughshod over the city for the last year. That situation is one of the great untold stories of 2020, a Communist militant group has been actively trying to overthrow the government and no one is doing a damn thing about it, not even the known fascist dictator Donald Trump. In other parts of the country, most of the country in fact, the cops wouldn't tolerate the antifa bullshit in the first place. Yet another reason to get out if you live somewhere unfriendly to the cause.
The other thing to consider is that law enforcement doesn't exist to prevent crime, other than via deterrence and that isn't really working either. In the event you are being victimized by a criminal, the best case scenario is that the cops show up after the fact, get your statement and then actually find the criminal. If someone breaks into your house and you call 911, it will be several minutes before the cops arrive if you are lucky. A deranged person can do a lot of bad stuff in five minutes in a house with women and children present. Your safety and the safety of your family is your responsibility and no one else. In the world we are living in and the far worse conditions to come, you are more and more likely to have to take decisive and perhaps kinetic action. The ratio of savages to civilized is rapidly skewing in a dangerous direction and this is the time to get your head wrapped around what you might have to do to protect what is your responsibility. Here is another example courtesy of Andy Ngo, a little more black-on-Asian White supremacist violence for ya.

NYPD is asking the public to help identify a black male who was recorded repeatedly punching & choking an Asian victim. The victim became unconscious. The attack occurred on the J Train at Kosciuszko Street Station. DM @NYPDTips or call 800-577-TIPS. pic.twitter.com/yfmmgFAWxj

The New York Police Department has an entire division that is supposed to keep things under control on public transit but that didn't help this guy. Notice the feral savage wasn't content to win the "fight", he pummeled the guy repeatedly when he was down and cowering and then proceeded to choke him unconscious and finally steals his shopping bag. Allegedly the smaller Asian called the black guy a nigger, which makes perfect sense in a subway car full of blacks. Also that apparently makes it OK to brutally assault someone and choke them unconscious before robbing them. Note as well that the subway car is full of people who stood there and didn't do a damn thing when that African could have easily killed this man.
The President of the New York Policeman's Benevolent Association warned subway riders last November that the cops can't protect them:
Police union boss tells MTA riders they’re on their own amid violence uptick
Where is Bernie Goetz when you need him? 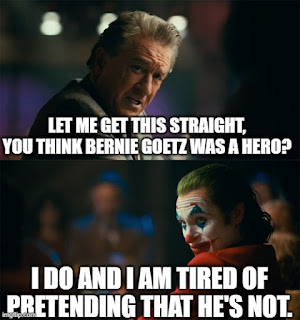 This is a clown world, little wonder Joker was so popular. In clown world we are all Bernie Goetz now. You can be Bernie or you can be the Asian guy getting choked out. The choice is yours.
All of our trusted institutions are rapidly failing us and many are already turned openly against us. This will only get worse. Get to know your neighbors and examine your situation. Failing to plan is planning for failure. 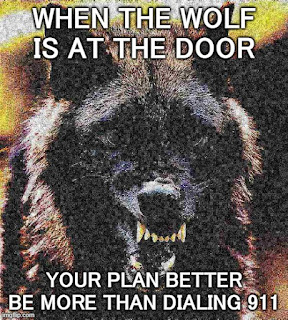