If you know anything today, you ought to know this:
No one is responsible for your safety and that of your family other than you.
Just you. No one else.
This is a story that is repeated so often it threatens to become background noise.
Mother of 6 Shot, Killed in Road Rage Incident on Way to the Beach
A 47 year old woman named Julie Eberly and her husband Ryan from Manheim, Pennsylvania were driving in North Carolina. Their 6 kids were at home with the grandparents and it sounds like the Eberly's were heading to the beach for a nice vacation after celebrating their anniversary. At some point they strayed too close to a 2010 Chevy, upsetting the driver who then pulled alongside the passenger side of the vehicle where Mrs. Eberly was sitting, who of course wasn't even driving, and he then proceeded to shoot into the passenger window, killing Mrs. Eberly. The police have a description of the shooter:
"The suspect operating the vehicle was described by witnesses as an African American man with dreadlocks."
The story from Newsweek gives a description of the shooter but many other news outlets I perused just described the car. Mrs. Eberly looks like anyone you might know, a middle aged White woman who was looking forward to a vacation away from her six kids but would be likely be desperately missing them before the vacation was over. Her hometown of Manheim is in Lancaster County, PA and is 96% White, probably a very nice place to live. 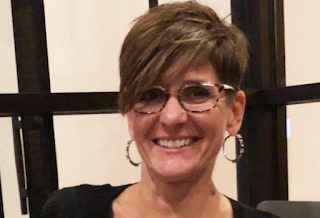 She was snatched away from her children because a black man in a fit of rage chose to shoot her. It reminded me of another story from last September: Wilma Hochstetler: Say Her Name. Wilma was a Mennonite woman who was robbed along with her husband who was fixing their vehicle by blacks  at gunpoint in Indianapolis. The men took their phones and had what they wanted and appeared to be leaving when the men stopped, turned around and shot Wilma and her husband Jonathan. She died and he was severely injured. As far as I can tell, the black men who murdered her for no reason have yet to be arrested.
The lesson is stark and brutal: you can never relax when in public.
This is especially true for those of us who live in rural or suburban areas. It can be easy to slip into complacency, assuming that because your neighbors are nice and decent people that everyone else is too but they are not. Even in nicer suburbs you can't relax as the family of 13 year old Lucia Whalen Bremer found out the hardest way possible when this young White girl was gunned down in broad daylight in what appears to be a very nice and affluent suburban neighborhood. 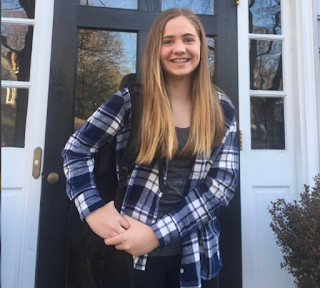 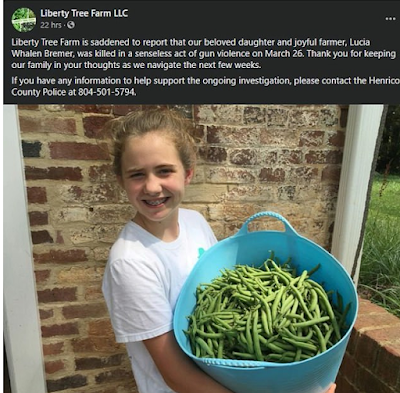 I grieve with the family but this wasn't a "senseless act of gun violence", as if the gun just shot her. The identity of the juvenile shooter is being withheld but the Henrico Police sent out a tweet with the description we already knew:
A 13 year old White girl with what appears to be incredible potential, murdered by a black teen like so many others while walking in her own neighborhood. A White mother of 6 on her way to the beach shot by a black man. A 59 year old White man murdered over a dollar at the fair and then spit on by two black teens and the murderer got "sentenced to a long-term juvenile behavioral modification program". A White couple, Channon Christian and Christopher Newsom, held hostage for days, sexually assaulted and murdered by a crew of blacks including a woman who participated in the torture and rape.
The names and faces blur together as wanton violence and mayhem becomes more commonplace by the day.
As I have written before in Holding Back The Tide, what we know as civil society is simply holding the savagery at bay. It is an eternal struggle....
"... civilization is the endless task of manning the bulwarks and holding back the savagery and barbarism that is humankind's natural state. There is never a moment when society can rest, either it is actively pushing back against barbarism or barbarism is encroaching on society."
We know where we are today. The barbarians are inside the gates and we let them in.
What is worse is that they no longer have any fear of us.
The savages have always hated us but once they also feared us, and for good reason. Today they still hate us but hold us in disdain. You can't really blame them, we have let them invade our nations, shit in our streets, assault us and rape our women and generally muck things up for the last half century. Today we can't even safely travel in the very cities we built without fear of feral teens trying to kill us.
They have forgotten who we are and to our shame so have we.

At one time the little island of England ruled colonies around the world, much of Africa and the middle east, parts of north and south America, Australia and Asia. What they didn't own, some other European power did. The European powers went where they willed and took what they wanted because they could. The Africans and mestizos and Asians would have done the same if they were capable but there have never been a people who combined mastery of arms with advanced technology quite like Europeans. If you were black or brown or yellow or red, when White people showed up it meant you were about to have a bad day.
Today no one is afraid of us. Sure you get morons like LeBron James talking about being hunted by White people but he doesn't believe that or he wouldn't live in an almost all White zip code. Decades of having the natural aggression of White people stamped out of us have left our people passive and weak. Worse still we are close to being outnumbered and being weak and outnumbered is a great way to get killed on an industrial scale. That is one reason why the 2nd Amendment is so important. It is much easier to starve millions to death or ship them off to the gulag when they are unarmed.
The savages have forgotten who we are and why they feared us. Worse yet, we have forgotten.
Never relax around them and remember who we are. It is time they start to remember as well. 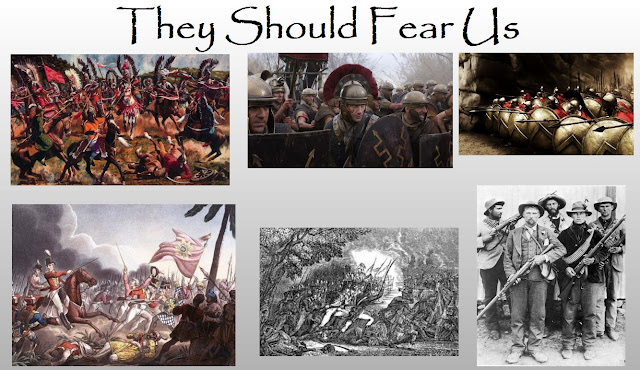