Mental Illness Is Not A Hate Crime

The New York Times uncharacteristically provides some much needed context to the shootings at Atlanta area "massage parlors", aka "rub and tug joints run by Asians": Atlanta Shootings Live Updates: Suspect Had Visited Targeted Spas Before, Police Say
Screenshot of the article in case they memory hole it later: 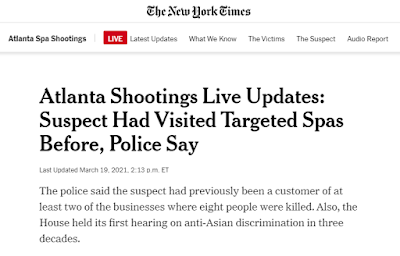 Here are some critical passages from the article:
The police said the suspect had previously been a customer of at least two of the businesses where eight people were killed.
Robert Aaron Long apparently didn't hate Asians enough to stop getting sex from Asian women but even still it doesn't sound like he had yellow fever so much as he frequented these places because of the ease of getting his taffy pulled.
Mr. Long, who is white, said he had targeted the spas because he wanted to remove a “temptation,” the authorities have said. A former roommate of his at a halfway house said Mr. Long had tried to stop acting on his sexual desires as recently as 2020 but had continued going to massage parlors for sex.
The motivation for the killing, deranged as it sounds, was to eliminate these sources of temptation as he saw them, not because the businesses were run by Asians but because the businesses were places someone like Long could go to pay for sexual gratification. I assume that a similar business run by Whites would have been just as appealing to Long or perhaps even more so but this particular business model seems to be confined mostly to Asians.
The authorities said he had been heading to Florida to commit similar violence at a business tied to the “porn industry.”
It is a safe bet that the porn business he was headed to was not run by Asians but more likely was run by Whites or Jews. Again this supports the belief that his motivation was not race based but rather his anger and violence was directed against the sex industry.
He said that Mr. Long had told the roommates, all of whom struggled with a form of addiction, that he had gone to spas run by people of Asian descent, and that other roommates in the halfway house asked him several times if that was intentional. He said he had chosen the businesses not because of the employees’ race, but because he thought the spas were safer than paying for sex elsewhere.
These are statements from people who knew Long prior to the shooting that confirm that he didn't frequent these establishments because of the race of the employees but rather the easy and apparently "safer" access they provided.
Taken together, this tells us:
A) There is ample evidence from multiple sources that Robert Aaron Long was motivated by a desire to inflict harm/remove temptation from purveyors of sex-related services.
and also...
B) There is absolutely no evidence whatsoever that the attacks were racially motivated and/or a "hate crime"
That hasn't stopped the Usurper and his Whore from talking about anti-Asian hate crimes in reference to this incident without once mentioning that blacks are far more likely than Whites to commit acts of violence against Asians. Nor has it troubled the editors of the reliably revolting Washington Post from allowing pieces like this to run: 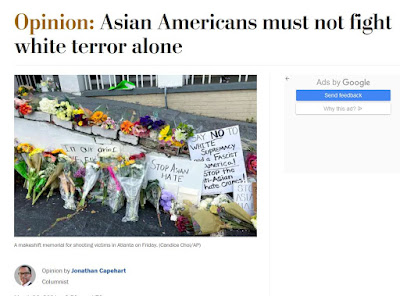 The people terrorizing Asians in America look a lot more like Jonathan Capehart than they look like me. Capehart isn't much of a writer but even he knows that the facts are against him, leading him to close with this nonsense....
We must not be cowed by the terror unleashed by White men drowning in the deep end of racism, xenophobia and misogyny. We must not be cowed by those who want to change the subject or lay blame elsewhere. And we must not let Asian Americans think for one minute they are alone. We’re in this fight together.
Lay the blame elsewhere? Like on the people who are committing the most violence against Asians, Capehart's fellow blacks?
Robert Aaron Long is a deeply disturbed, mentally ill young man. He was never able to get the help he needed, and perhaps there isn't much that could have helped him. He committed a heinous crime, and even if the people murdered were involved in sex trafficking and prostitution he still shouldn't have killed them. He ought to be put to death. But another crime is being committed in the aftermath, one that is not only never punished in America but often applauded, the crime of slandering White people.
The Asian community in America has been crying out for justice as the attacks on their community from mostly black assailants has increased in 2021 and no one seemed to care, not until a politically useful incident that wasn't even driven by race caught the media's eye. The Asian community should call out this double standard instead of sitting by mutely while their suffering is exploited for the purpose of anti-White propaganda.
Posted by Arthur Sido at 12:00 PM