You know that the oligarchs were deeply disappointed to hear that the Boulder shooter was a balding, 21 year old Muslim from Syria named Ahmad Al Aliwi Alissa who didn't like Trump. 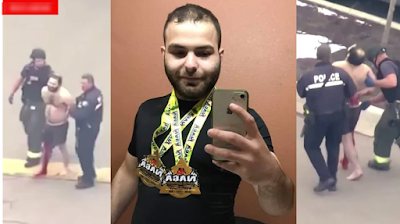 That simply won't do at all. But leave it to sunny Joe and his valiant team of mandarins!
Biden considering executive action on gun control, Psaki says
What could he do?
Lots of stuff, although not banning "assault weapons"....
Alan Gottlieb, founder of the Second Amendment Foundation, said that Biden could use the Bureau of Alcohol, Tobacco, Firearms and Explosives (ATF) to tighten regulations. "What we’re expecting him to do is anything with foreign commerce -- if the firearm is being imported in or magazine or ammo is being imported in -- he could by executive order try to do something in that nature," Gottlieb said.
Gun control advocates, meanwhile, are calling on the White House to take executive action to expand the background check system by redefining who is in the business of selling guns. They say they want to see the administration reclassify what is considered a gun in an effort to shut down the "ghost gun" market. Ghost guns are not subject to serial numbers or background checks because they are assembled from kits that include one unfinished piece, typically the receiver.
So called 80% receivers are probably going to get the hammer soon and expect to see AR/AK pistols reclassified as short-barreled rifles subject to the additional NFA regulations. Likewise he has some power over imported firearms, so I hope you have that Arsenal AK you wanted already.
Just wait until the real false flag happens and it is probably coming soon.
Meanwhile Big Country Expat is doing solid work on this whole shooting, here is the latest as of this post: Analysis of The Current Black Flag Op
Posted by Arthur Sido at 4:17 PM