It Will Never Be Enough

We are told that the great equalizer, the golden snitch for blacks, are "reparations", cash payments for past injustices committed by people who are mostly long dead and paid to people who weren't even born yet when these injustices allegedly happened. So far this has been rejected as even the average low information American understands that a) it is ridiculous for people today to be forced to pay for something they had no part in and b) it will serve to inflame racial tensions even more as poor Whites will be expected to pay reparations to blacks.
That is changing as American demographics change and it looks to be starting in the city of Evanston, Illinois which is proposing cash payments to black residents. As you probably expect, what is being proposed, while grossly unjust, is simply not enough.... 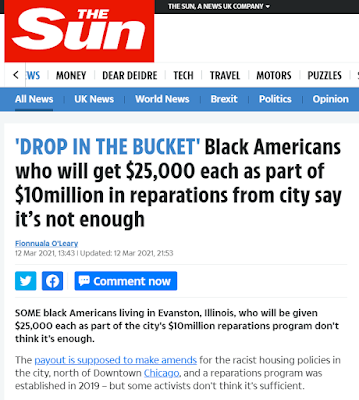 $25,000 in a lump sum welfare payment is not enough and (spoiler alert) no amount will ever be enough. From the article:
However, Rev Michael Nabors, who is the president of the Evanston NAACP, thinks $25,000 is a "drop in the bucket."
"When it's all said and done, however much money is raised for reparations... will only be a drop in the bucket for the suffering and the oppression that Black people experienced in this nation," he told Newsweek.
"When we talk about that being a drop in the bucket, that's what we're talking about.
"There is no amount of money in the world that can take the place of the pain and the suffering that was caused emotionally, that was caused psychologically.
"The only thing that we can do to try to make up for that is by building a beloved community in Evanston, and I think that reparations is a part of that effort."
Lots of people suffered and are suffering today, and lots of blacks have done very well for themselves and live far better lives in "racist" America than they would in any majority black nation. Despite having every opportunity and often being given preferential treatment, blacks still lag economically and socially behind not only Whites but every other racial group. Asians and Jews certainly had all sorts of hurdles when they came here but by and large have become successful. On the other hand blacks lead all other groups when it comes to various social pathologies, most notably violent crime. 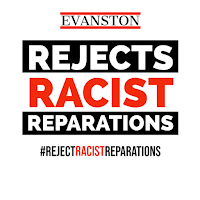 A Facebook group has popped up called Evanston Rejects Racist Reparations but they aren't really rejecting the reparations because they are "racist" but rather because they are limited to people and their descendants who lived in Evanston during a certain time period when there was alleged housing discrimination. This group is demanding more money and to any black person who lives in Evanston. They also seem upset that even be given $25,000 as a down-payment for a home still means that you have to have decent credit. In other words what they are demanding is an endless firehose of money without limit or qualification other than being black.
One thing you will notice about advocates for reparations is how slippery they are. You can't pin them down on a number that will "fix" the problem because they have a vested interest in never fixing the issue. I have said for years that while smart Whites and Asian go into engineering or medicine, smart blacks go into the race hustler industrial complex. You don't have to do anything and you can't get fired. So they question "how much is enough" when it comes to reparations is always answered with "more". They know that giving blacks lump sums or monthly payments won't solve any problems but they can siphon money off of the hustle and never need to get a real job.
What I thought was really funny was that the reparations funds come from a tax on recreational marijuana. Gee, I wonder who is buying that weed and funding the reparations? So DaQuandiddle and his boyz buy some recreational weed and are charged a 3% tax on said weed in order to pay for he and his homeyz to get reparations. They probably think this is a great deal.
This is coming nationally, it is only a matter of time. Democrats love bribing blacks with fake money and most Republicans are too cowardly to say no for fear of being called "racist". Probably not this year but certainly after 2022 if Democrats have a good mid-term election as I expect they will.
The illegitimate junta that operates under the name of the Usurper Joe Biden serves one basic purpose: crapping on heritage Americans in order to secure the votes of minorities. That is it. Such a "government" is not deserving of being called American or being obeyed.
Posted by Arthur Sido at 3:52 PM