I took the wife out for dinner last night at a BBQ place in town. Pretty good chow, I think I might have done some damage to my internal organs from wolfing the food down too quickly. Anyway, they were playing classic rock over the speakers so that was cool but off to my left in what was the bar area the TVs had on sports. I couldn't hear what they were saying but there was a segment on the NBA and a bunch of the players were wearing jerseys with the word "Equality" printed on them, like this one: 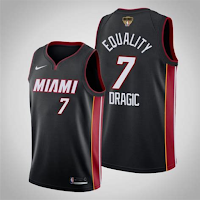 That just struck me as the most meaningless bullshit I had ever seen.
There are 30 teams in the NBA that draw their players from around the world. Each team can have 15 players, only 13 being active for a given game. That means that the NBA is an exclusive club with only 450 members out of the 7.7 billion people in the world. It is one of the most exclusive sports organizations in the world, having narrowed down the millions of kids who made the basketball team in high school to the thousands who were good enough to play in college and finally reduced to the 450 good enough to play in the NBA. They are the elite of the basketball world and are paid accordingly. Even in the NBA there is nothing approaching "equality". According to ESPN, the highest paid player in the NBA is Stephen Curry from the Golden State Warriors who is making $43,006,362. The lowest paid players are guys like Deividas Sirvydis making the league minimum $898,310. Based on my calculations that means the lowest paid players are making around 2% of what Curry makes. In other words Stephen Curry makes 50 times what Deividas Sirvydis makes. Equality indeed.
I was surprised that mental midget LeBron James was only the 7th highest paid player in the NBA but I imagine his endorsement deals are enormous, enough to pay for his lavish houses in mostly White suburbs.
Also, players in the NBA are around 75% black and only 17% White. Even worse, the league is only around 2.2% mestizo and 0.4% Asian. How is that representing "equality"?
It doesn't, at least not how the word is used today. In theory every guy in America has the opportunity to play in the NBA. However only a tiny fraction of a percent of us have the requisite skills and physical attributes to play even at the college level, much less professionally. Even if I practiced all day, every day in high school with a team of coaches dedicated to making me the best basketball player I could be, I would never have been good enough for the NBA and at best I might have made my high school varsity team. We all understand this and accept it. The equality of the NBA is in theory only.
Equality is a meaningless, squishy term. They can say with a straight face that the NBA is all about equality while those actually playing in the NBA live like kings and make up a tiny fraction of the country. But when any group other than Whites lags Whites in any category, suddenly equality becomes a huge issue that warrants kneeling, social justice messages on jerseys and endless kvetching from millionaires about how unfair life is.
No one really believes in equality. Nature itself teaches us that it doesn't exist. There are predators and there is prey. Some people are taller, faster, more intelligent than others. Even identical twins are not completely equal. Striving for equality is a waste of time. We should instead be talking about how to use what you do have in the best way possible for each person. As spoken by the Prophet Judge Elihu Smails (pbuth) "The world needs ditch diggers too".
Equality is a false god.