Building Up To The Big Finish

Just last week we had sex addict Robert Aaron Long's shooting rampage in Atlanta and within hours we had pictures of the guy and his whole life story. Last night a new guy showed up at a King Soopers grocery store in Boulder, Colorado and shot and killed at least ten people. No name, no information on the guy, just a picture of him walking out of the store in cuffs in his boxers. According to witnesses, he didn't say anything before he started shooting. The place looks like the town in First Blood after Rambo shot it up with an M60. 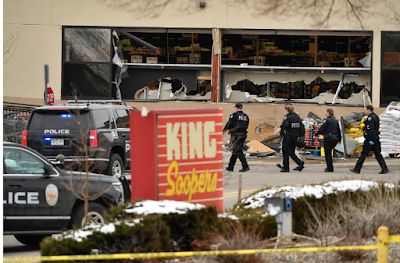 Not coincidentally I have been slowly working through a relevant book: Poisoner in Chief: Sidney Gottlieb and the CIA Search for Mind Control looking back at Sidney Gottlieb, a CIA guy who was obsessed with poisoning and was instrumental in the attempts to perfect mind control, including being the head the MKUltra program. I'll save you the trouble of looking up Gottlieb's background, yes he was. Anyway, the CIA and the U.S. government in general was into some pretty sketchy stuff way back in the 1950s and the experiments were as bad as what you hear about the Nazis doing. The difference is that the Holocaust-Industrial Complex controls Hollywood so you only hear about the Germans doing this crap.
If the government was doing experiments in mind control back in the 50s, do you think they stopped? Or is it more likely they kept on doing it and have been perfecting the process?
You already know that answer.
Posted by Arthur Sido at 7:28 AM