In the wake of the mass shooting/mass murder events in Atlanta, the usual suspects are coming out of the woodwork to work their hustle. For example we see this from White liberals flavor of the day black "intellectual" Ibram X. Kendi 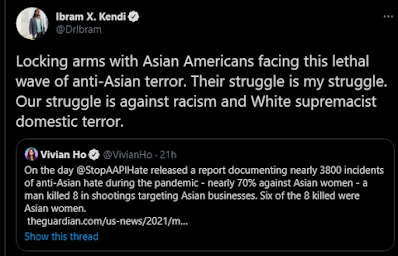 Pretty standard fare from him, the same word salad that he thinks sounds super smart but isn't fooling anyone but the White lefties who buy his books. I assume deep down even they know he isn't really all that bright, more that he is kind of clever like Obama and following him on social media gives White libs street cred with other White libs.
Of course this isn't accurate at all. Table 14 of the 2018 Bureau of Justice Statistics Criminal Victimization report paints a very different picture:

Over 27% of the violent incidents against Asians in 2018 were committed by blacks. I would guess a significant portion of the 14% listed as "Other" were at least partly black. By contrast Whites committed 24.1% of the violent incidents, the same percentage as Asians themselves even though Whites are 62% of the population while blacks are around 12-13% of the population. In fact blacks commit crimes against Asians far out of proportion to their attacks on Whites and mestizos, I suspect because Asians are generally smaller and are more appealing as targets. Some may also be the tendency for Asians and blacks to overlap in urban areas.
Facts are White supremacy I guess.
This is part of the broader pattern of interracial violence and the general patterns of violent crime and race. Here is the oft quoted Table 12 from that same report. 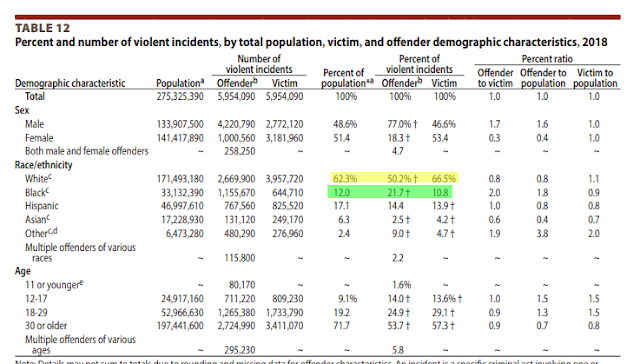 Whites are significantly less likely to commit "violent incidents" and slightly more likely to be the victims, while blacks are dramatically more likely to commit violent incidents and oddly enough slightly less likely to be victims. With a population of around 33 million and a little over 1 million acts of violence per year, that means that about 3% of blacks commit a reported violent incident in a given year. Whites are less than half as likely to commit a violent incident. A violent incident could be anything from assault or rape to domestic violence or a fight in a bar.
Meanwhile also contrary to the media narrative, the sort of mass shooting leading to mass murder that Robert Aaron Long is accused of is very rare among Whites, despite Whites being 2/3 of the population and widely panned for our love of firearms. From Steve Sailer....
The Great White Defendant: First Mass Killing By A White Man Since 2019
Whites just don't commit mass murders or mass shootings all that often. Meanwhile there is a mass shooting every weekend in one or more major Americans cities committed by black shooters.
Be sure to point this out to anyone who claims that the shooting of Asian women at Atlanta area massage parlors is part of a wider pattern. The opposite is true, White men committing mass murder is so rare as to be noteworthy while mass shootings by blacks is commonplace, as are attacks by blacks on Asians.
Posted by Arthur Sido at 7:29 AM