Remember Malik "Dollar Store Tiger Woods" Halfacre (HT: John Wilder)? I mentioned him in my post Back At It after Malik decided to murder four people and kidnap his own kid. Nice guy. 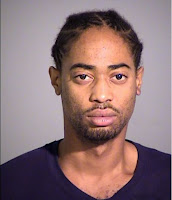 Anyway, the news reported today that this quadruple murder was the result of an argument over...a stimulus check.
Family: Stimulus check argument led to Indianapolis quadruple murder
Her family said Jeanettrius Moore worked hard at a beauty supply shop to support herself and two little girls and appreciated the most recent $1,400 stimulus check issued to help Americans recover from the COVID-19 pandemic.
The father of her youngest baby, Malik Halfacre, thought he should get half, according to Moore’s relatives.
“He wanted some of Jeanettrius’ tax money, stimulus money,” said Wendy Johnson, a cousin who heard Jeanettrius’ account of what led up to a quadruple murder at an Indianapolis home Saturday night.
Johnson said she was told that the day before the shooting Halfacre told Moore “he wanted half of her money.”
Apparently his baby mama was holding out on him so of course he popped a cap in dat bitch. Plus her mama and her brother and her cousin and her 7 year old girl. What else would you do in that situation? It wasn't like she was providing all of the support for their child or anything.
As it happens, he ended up killing four people but his baby mama survived. Not so lucky...
The family identified the dead as Moore’s 7-year-old daughter, Eve Moore, her brother, 23-year-old Daquan Moore, her mother, 44-year-old Tomeeka Brown, and her cousin, 35-year-old Anthony Johnson.
Nice shooting Tex, killing a 7 year old. Not only did he not get half dat money, now he gets 100% of a needle in the arm or a lifetime in prison.
Broken families. A consistent lack of self-control and an inability to consider the consequences of your actions. A sense of entitlement. Irritation that turns to rage and then to violence in the blink of an eye.
Those are the common threads linking most gun violence in America and none of it will be addressed by any legislation that is pending in Congress.
Ask yourself, what is the real purpose of these gun control laws?
Posted by Arthur Sido at 8:21 AM