Arthur Sido February 13, 2021 10 Comments
I avoided saying about Tessica (😁) Brown and the whole Gorilla Glue saga, the woman is obviously an imbecile so it seemed a little cruel to pile on, even if the whole episode raises issues of someone like her being given the same right to vote as someone who isn’t a dolt. Anyway, you would think that putting Gorilla Glue in your hair is so clearly idiotic that everyone would make fun of her for a couple of days and then the whole thing would go away.
You would be wrong because it is 2021.
In 2021 we are seeing new levels of racial chauvinism once thought unimaginable and from the people least deserving of overweening pride.
I am sure there are other examples but here are a couple I ran across. First from “Exavier” Pope, apparently his parents thought he was so special that they needed to add an E to Xavier. He is a lawyer of some sort and works to increase “diversity” in sports “journalism” and this was his response to Gorilla Glue expressing sorrow that Tessica Brown is a dumbass. 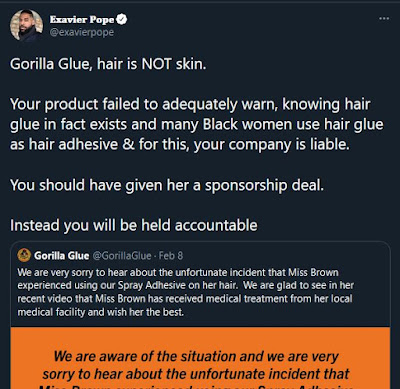 The replies to his tweet are scorching and lots and lots of them are from black women who rightly understand that Tessica Brown is an idiot and trying to excuse her behavior under the guise of “racism” makes all black women look stupid by association. His response to getting torched by his own people?

Y’all hate your own because you refuse to make excuses for stupidity. Further proof, if you needed any, that holding a law degree is not any sort of indication that someone has an ounce of common sense. I am sure he considers himself quite an intellectual powerhouse and that is even more hilarious.

It isn’t just black “lawyers” using Gorilla Glue girl to express their racial solidarity. NBC LX, an official division of NBC, posted a five tweet thread explaining that the real reason Tessica Brown put a super strong adhesive in her hair was….racism. Of course. It starts off saying that black wahmen suffer a great deal of pain doing they hair, which is the fault of White people, and finishes with this: 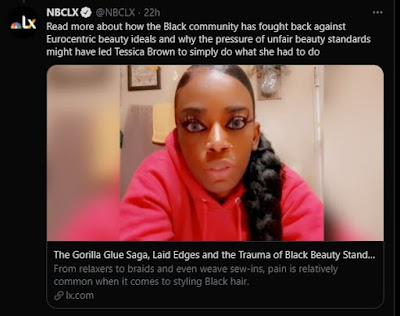 She didn’t do something clearly moronic, she was literally forced to put an industrial strength adhesive in her hair because Eurocentric beauty ideals made her do it.
Two questions.
Have the people at NBCLX ever seen a White woman? Because whatever the hell Tessica has going on there is the antithesis of “Eurocentric beauty ideals”. That mess is all a product of black “beauty ideals”. The gross double nose rings, the fake gaudy eyelashes, the plastered to your head hair. That is about as far from Eurocentric as you can get.
Secondly, do the people at NBCLX understand that the United States was created entirely by Europeans for Europeans and therefore our nation is understandably “Eurocentric”? I don’t bitch about Kenya being “Afrocentric” because it is an African nation. The United States of America, despite having a permanent population of African slaves and their descendants, was always intended as a nation of Europeans.
If you can count on anything in 2021, it is that no matter how stupid something is there will be plenty of people lined up to make it worse and blame it on White people.