The U.S. Will Lose The Next Big War

For most of my life there was one unassailable fact: American could kick the ass of any other country on earth. Of course we worried about the Russians because in a nuclear war no one wins but in a conventional war we were pretty convinced that we would clobber them. A lot of it was post-Vietnam bravado, I was too young to remember any of the waning days of the war when the U.S. forces fled Vietnam, but there was a concerted effort to build up our military under Reagan and a few scattered conflicts like Grenada and the first Gulf War helped to renew our faith in U.S. military supremacy. The Balkan conflict and the Black Hawk Down incidents might have given us pause but then 9/11 rolled around and we had the chance to demonstrate yet again that in a conventional war, the U.S. couldn't be beat.
That was then. This is now.

Not my best meme but you get the point. The guys who jumped out of planes, rode gliders into the ground and stormed the beaches in France in 1944 would be disgusted to see what has become of the U.S. military. Less than a week after occupying the White House, former Vice-President Joe Biden reversed a Trump order that banned trannies from serving in the military. Apparently that is what the average Biden voter really wanted. Meanwhile no coronavirus relief checks in sight. At least he doesn't send out mean tweets!
Meanwhile in China, they are openly declaring that the feminization of young men is a problem and are actively trying to do something about it.
The Chinese own the Usurper Joe Biden and have no fear of the U.S. military because they know their pet will never use it against them. At the same time they are working to purge the effeminate sissies from their society, something the U.S. should also be doing.
In Russia, they are working on next generation missile systems and this super cool new combat armor, a fourth generation Sotnik or "Centurion" armor. 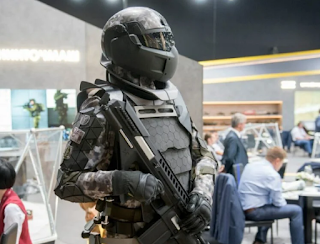 Kinda has a HALO vibe to it.
Allegedly it "is engineered to withstand a direct shot from a .50 caliber M2 Browning". I have my doubts. If you get punched in the chest with a .50 cal, maybe the armor will indeed stop it from penetrating but that won't stop it from crushing your internal organs. There is also an exoskeleton in development to allow Russian soldiers to carry more weight, one of the big tradeoffs for infantry being how much they can carry versus being able to actually move.
Maybe the gear is gimmicky and won't work, and sure the Russians have one whole aircraft carrier that needs a tug to accompany it everywhere and half of the toilets freeze in cold weather but at least they are trying. They seem to be focusing on ways to circumvent U.S. technological and numerical superiority, ex. building hypersonic anti-ship missiles to sink our aircraft carriers instead of trying to match our carrier fleet ship for ship.
As a nation with around 143 million people and the largest landmass of any nation in the world, rich with natural resources and especially freshwater, Russia could be a serious threat if they could stop getting sloshed on vodka. While our "leaders" seem mostly clueless, Putin understands what is going on in the world. He recently spoke at the World Economic Forum and threw cold water on the idea of the "Great Reset", at least for Russian: Great Reset? Putin Says, "Not So Fast"
While the U.S. and the rest of the West is being transformed by the globalist cabal that is now openly trying to take over every aspect of our economy and society, Russia and China are preparing for a post-U.S. future that they think they will lead. Without a credible U.S. military threat to serve as a counterweight, who will stop them and at least in the case of Russia I am starting to think that a world order with them at the top would be preferable to the U.S. under the control of globohomo corporations and their partners in government.
What seems pretty certain is that in a real war, not a one sided conflict like kicking around the Iraqis, the U.S. would be in real trouble. The rest of the world seems to be figuring this out and trying to decide how to survive without U.S. military hegemony. A military that is seemingly more concerned with being an engine for "social justice" rather than killing their enemies is destined for an ass kicking. Maybe getting pummeled in a war wouldn't be a bad thing?
Posted by Arthur Sido at 9:39 AM