One Party, One Branch

Of course that hasn’t been the case for more than a century.
With the Presidency in the hands of Democrats, likely permanently, and both chambers of Congress also in the hands of Democrats, also likely permanently, that only leaves the judicial branch. Trump appointed a lot of judges, most prominently his three Supreme Court appointments: Gorsuch, Kavanaugh and Barrett. While packing the courts by adding a bunch of seats to the SCOTUS and the Circuit Courts and then loading them up with liberals is still on the menu, likely after the SCOTUS overturns some gun control legislation or something and we start hearing about Trump’s appointments being illegitimate and the need to add seats and/or impeaching and removing his appointees in the name of “public safety”, there are other steps Biden’s puppet-masters can take to start to sway the judiciary and the first one has been announced:
The U.S. Attorneys oversee specific regions and act as the prosecutorial arm of the government for those areas. For example, Gary T. Bell is the U.S. Attorney for Northern Indiana covering the region where I live, as well as South Bend, Fort Wayne and northwest Indiana which borders Chicago: 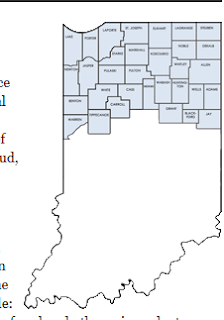 Anyway, by gutting the U.S. Attorneys, the Biden handlers are planning on replacing them with partisan hacks who will certainly focus more on “domestic terrorists” and “hate crimes” and less on actual crimes.
This is the difference between a party that is serious and a party that really prefers to be out of power so they can stick to impotently railing against their opponents.
Republicans get both chambers of Congress and the White House and immediately start worrying about bi-partisanship and figuring out how to lose the next election.
Democrats get both chambers of Congress and the White House and immediately work to consolidate their power and ensure they never lose it.
As soon as they can, they will start to lock down the judicial branch and then we will have nothing at all resembling the limited government of checks and balances and will rather become an open uni-party state with every branch of government working in unison.
Every vote for a Republican I have cast since I was eligible to vote in 1992 has been a complete waste of time.