This isn't a trolling tweet, this chick is serious. 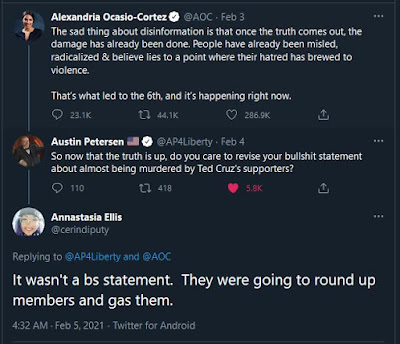 Like I said to her, if thousands of protesters really wanted to harm members of Congress, a few dozen Capitol cops wouldn't have stopped them and their heads would be on spikes in front of the Capitol building. Not sure about the plan to gas them, I don't think we have any currently operating death camps in the U.S., at least none I am aware of.
You can't have rational conversations with people who think this is real and there are literally millions of people who would take a statement like that seriously, who think that AOC was really in danger including AOC herself who is making tavern wenches throughout history hang their heads in shame.
Round members up and gas them. FFS.
Posted by Arthur Sido at 3:48 PM