It Wuz Dem Vid-Yo Gamez That Made Me Jack Dat Car!

Back in the 1980s there was the great Dungeons & Dragons scare. As the game became wildly popular, rumors began to swirl that some kids were taking it too seriously and killing other kids with swords. This wasn't true but it didn't stop some religious grifters from pushing the story to scare people. Before that it was Elvis Pressley's swaying hips causing teenagers to have impure thoughts, as if teens need any help having impure thoughts. Later when two losers shot up Columbine High School, weirdo rocker Marilyn Manson was blamed. Absent from any of these deflections was the idea that people who do terrible stuff are responsible for their own actions.
The idea of blaming external forces for bad behavior has found especially fertile ground in the 2020s.
As if things weren't bad enough in Chicago, 2021 has seen a spate of car jackings. As of last weekend, CPD was reporting 241 carjackers arrested already in 2021. Those are just the arrests and with about 50 days into the year as of the report, that works out to around five carjackers arrested per day in the middle of winter. Who knows how many got away with it, double or triple that number at least. Over the weekend two "youths" were arrested for carjacking a guy at gun point, they were ages 13 and 14. According to this chart at Hey Jackass!, we are trending toward a record year for carjackings in the windy city: 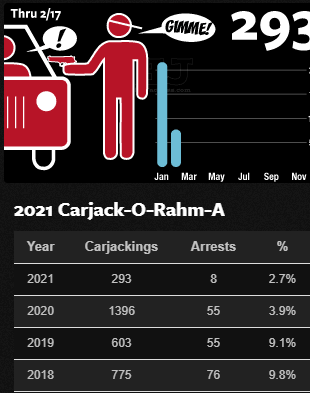 As of 2/17 when this chart is dated, 48 days have elapsed in 2021 out of 365, or 13% of the year. Based on that, Chicago is on pace for more than 2,250 carjackings which would be almost 1000 more than in 2020 when Chicago had almost 1400 carjackings which doubled the prior year. If any of the math here is wrong, Engineer Jim will correct me. Also of note, as of the latest from Hey Jackass! there have been 400 people shot in Chicago already this year and we have had a very cold late winter in the Midwest. Temps are rising and lead will be flying!
As with murders, you can be reasonably certain that the carjackers in Chicago fit a certain demographic profile. We aren't supposed to notice that of course but it is still true.
If you have kids in your community as young as 13 and 14 pulling guns on other people and stealing their cars, you might think you have a problem somewhere in that community. Perhaps there is a cultural issue or an problem with parenting. But this is 2021 so the real issue is:
Video games.
Yep. A State Representative in Illinois by the name of Marcus Evans is trying to ban Grand Theft Auto from being sold in Illinois.
Illinois lawmakers want to ban 'Grand Theft Auto' amid spike in carjackings
That isn't a joke.
Here is Representative Evans: 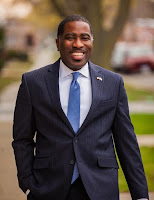 There are a bunch of issues with this but let me just walk you through a couple of them.
First, the Grand Theft Auto franchise has been around since 1997, so around 23 years and about a decade before our 13 and 14 year old carjackers were even born.
Second, the latest GTA game, number five in the series, came out in 2013, so it has been around for 7 years but only recently have we seen a surge in carjackings.
Third, GTA V is the second highest selling video game ever, only trailing Minecraft. There have been 140 million copies sold across every major gaming platform.
Fourth, I would be willing to bet that the majority of people who bought GTA were White but generally carjacking is a black thang.
So we have a relatively old video game series that sold over 100 million copies, mostly to young White kids, and yet the spike in carjackings in Chicago seems to be only in one community. It might seem that the problem isn't really that kids play a game that includes carjacking and instead that Mr. Evans racial community seems to have a serious problem with violent criminality. Or perhaps black childruns can't differentiate between a video game and real life?
Of course saying things like that doesn't get people like Marcus Evans votes or donations. Let's blame video games instead of demanding our families and community takes responsibility!
The people who are supposed to be "leaders" in the black community almost universally make things worse, in large measure because they refuse to hold their own community accountable and instead pass the blame onto mystic forces like "racism" and video games.
Look for the violence in the inner cities to be far worse in 2021. It might be time to start walling these cities off and letting nature take it's course.
Posted by Arthur Sido at 8:00 AM