It Is Time To Retire The Idea Of Patriotism 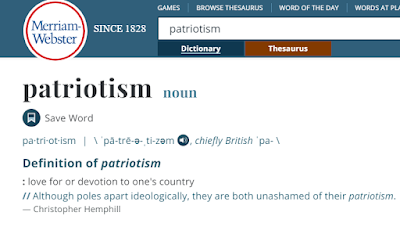 If there is an overused term on /ourside/, it has to be "patriot".
It is a cheap throwaway term in 2021 for the simple reason that it doesn't really mean anything.
You might say you love your country and are therefore a patriot. Great! What country are you talking about? The America of last century, the America many of us grew up in? That country is gone, destroyed not by foreign invaders but by enemies from within our own nation, many that we welcomed in and offered the same rights and opportunities intended for the people who built this once great nation. Nostalgia is great when sitting around chewing the fat with your buddies over a cold one or six but it is utterly useless for moving us forward.
Perhaps you served in the military and that makes you a patriot. Ask yourself what your service in the military had to do with your own country. Unless you are in your 90s and served in the Pacific theater of World War II, you really haven't defended the U.S. in any meaningful way. That is not to denigrate your service, simply pointing out that as a people and especially those who most identify with patriotism, we have been manipulated into sending our sons to die and get maimed in foreign conflicts for the better part of 120 years with almost no actual American interests in sight.
Or you might be in love with our system of government. Understandable, it is the best system developed by man. Unfortunately there are two extenuating circumstances: one, the system only works in a limited, homogeneous society and two, the system of government we thought we had no longer exists and hasn't for a very long time. The Constitution? Please, it only means what a given judge says it means on a given day. Many of our actual enumerated rights are restricted and infringed, and are about to get a whole lot more infringier. At the same time, stuff that has no mention in the Constitution is granted status as holy writ. Can you imagine explaining to the men who wrote the Constitution that what they really meant was that women have a "right" to pay a "doctor" to butcher their child in utero or that a couple of sodomites could get "married"? They would have laughed in your face and/or punched you in the mouth.
Face it, the country, way of life, whatever you think of when you think about patriotism, is gone. What has replaced it and continues to replace it is nothing you should be proud of or devoted to. I think we all understand it and the concept of patriotism has changed dramatically, even if most of us don't admit it. What are we proud of about what America has become? Still many people still calls themselves "patriots" while they are simultaneously revolted by what has become of this nation. Some of it is based in nostalgia and reflex but there is something else at work.
Patriotism is a way to shroud the real struggle in an amorphous and outdated term. It means almost nothing in 2021 but it gives cover to those who wish to shy away from the less palatable expressions of the war we find ourselves in: "I ain't a racist, imma patriot!". That might make you feel better about yourself but to the left patriot = racist. Trying to play word games with them is a waste of time.
What we need are a fewer patriots and a lot more pragmatists who see the world for what it is and plan and act accordingly instead of misty eyed dreamers who pine for days that are never coming back, no matter how hard we vote. Some day perhaps our grandkids will live in a society that they can be patriotic about but we are a long way from that day right now. 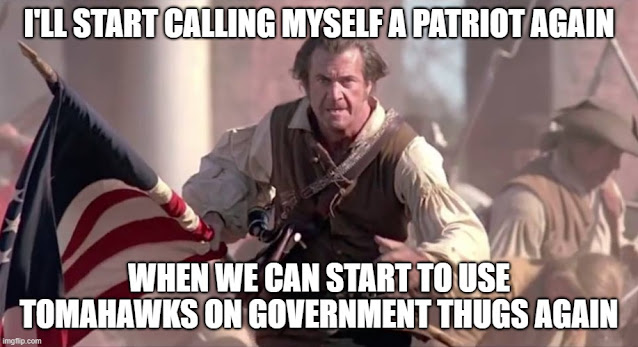