I Wouldn't Say I Missed The Super Bowl

When I checked the news yesterday, it was a little jarring when I realized that it was Super Bowl Sunday. It was jarring because I had no idea the Super Bowl was taking place that day and I couldn't even remember who was playing against Tampa, and I only knew Tampa was playing because Tom Brady is their QB. Really, the dude is 43 years old so just a little younger than me, and playing in the Super Bowl.
Anyway, Tampa Bay won and Brady got his seventh championship at age 43. Seven. At a minimum the best quarterback to play the game and perhaps the best player period, joining the ranks of undisputed GOATs in their respective sports with the likes of Michael Jordan and Wayne Gretzky. That is cool and all, and great for him, but who cares? Well Tom Brady cares but who else cares? 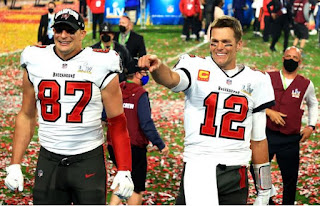 The spectacle of grown men living their lives vicariously through professional/college sports, often worshipping athletes they wouldn't feel safe having around their kids, is simply grotesque. It isn't that sports are inherently bad, some of the best character development happens when kids play sports and learn how to lose, the value of hard work and the importance of teamwork. However at the professional level and now even the college level, sports is just a banal spectacle for the simple reason that it has very little to do with the sports themselves. It is all about the spectacle of it.
Adding in the woke/social "justice" garbage and most high level sports are just unwatchable. This year at the Super Bowl there was a singing of the "black national anthem" which would be great if the game was being played in an African country but pretending that the "black national anthem" is somehow anything on par with the Star Spangled Banner is just childish. Plus some chick named Sarah Thomas was the first female to officiate in a Super Bowl. Stunning! Brave! Sure she has zero experience in playing competitive football but she does have the natural ability of all women to make arbitrary judgements of men, being inconsistent and capricious. In other words a perfect ref for a football game. I am sure the ads were as mundane and insulting as usual.
Anyway, that is more that enough about sports. The whole thing is fake and gay and you should stop watching if for some reason you still are.
Posted by Arthur Sido at 8:37 AM