I Guess We Are The Taliban Now

The good people who are completely unbiased and professional journalists at NPR had Robert Grenier on All Things Considered to give his opinion on "domestic extremism". Richard Grenier is a career CIA hack, working for The Agency from 1979 on and off until he was fired in 2006 when he held the position of Director, CIA Counterterrorism Center. Prior to that he was the CIA station chief for Pakistan and Afghanistan and chief of the "Iraq Issues Group". Anyway, Rick thinks he knows how to deal with those dastardly podium stealers and Gamestop investors: the same way we "defeated" the Taliban!
Former CIA Officer: Treat Domestic Extremism As An Insurgency
Here is the tweet from NPR: 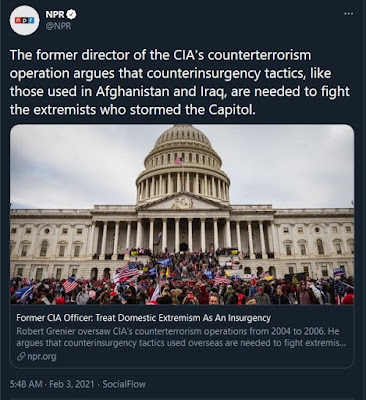 Reminder:
We invaded Afghanistan and Iraq, the latter based on completely bogus "intelligence" that certainly was touched by Richard Grenier. We were fighting a foreign power that we were told was responsible for the 9/11 attacks.
On the other hand, the people Grenier is talking about are American citizens.
Let that settle over you. Based on a couple of hours of people wandering around a public building, what was once known as "The People's House", a man who worked for the CIA for decades is have a serious conversation with a "journalist" from a publicly funded radio station in which he declares the need to view American citizens in the same manner as the U.S. military and intelligence community viewed the Taliban who were actively killing and maiming American troops. The House of Representatives website still features a page talking about The People's House: 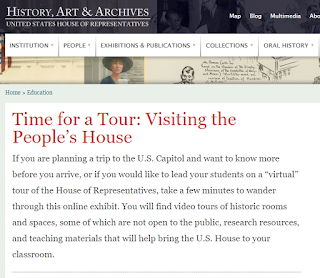 If it were not 2021, the audacity of this treasonous language would be stunning. At worst, the people who "broke into" a public building did so on the spur of the moment, likely egged on by planted operatives, and engaged almost entirely in good natured shenanigans more akin to a fraternity conducting a panty raid on a nearby sorority house. Yes there was some damage and very limited but still regrettable violence including the shooting of an unarmed female veteran but compared to Portland? Seattle? Kenosha? An average Tuesday in Chicago?
For that we get a long time CIA flunky speaking on a public radio station calling for American citizens to be treated like militant insurgents from a third world nation.
Another reminder:
We are about 20 years into the occupation of Afghanistan, known as the graveyard of empires for a reason, with no end in sight and certainly nothing resembling a "victory". Our tactics in Afghanistan are going to end with us eventually handing control of the country right back to the Taliban. Meanwhile thousands of non-combatant Afghani civilians are dead and far too many American troops as well.
Meanwhile in Iraq the tactics pushed by people like Grenier led to a quagmire that devolved into a bloodbath. Thousands of American troops were killed or maimed or left with debilitating mental health issues. Hundreds of thousands of Iraqi civilians were killed.
If that is the strategy they plan to employ, the bloodshed would be incredible. Perhaps that is the plan.
Also another reminder:
Afghanistan is a backward nation of 32 million people scattered over 251,830 square miles. The insurgents were using weapons that seemed to be mostly relics from the Soviet occupation.
America? This is a nation of over 330 million people, 75 million who voted for Trump. We have in our possession 400 million or more modern firearms that would put to shame anything available in most wars. Advanced optics, modern lethal ammunition, plus millions of veterans with years of military training. Oh, and America is 3,796,742 square miles or more than 15 times the size of Afghanistan.
How do you think the tactics that failed in Afghanistan are going to do here?
All of the talk of unity was bullshit. The American Left and their globalist puppetmasters see the American people as the enemy of the American state.
This isn't going to end the way they think it is.
Posted by Arthur Sido at 4:20 PM