In the degenerate world of freaks, degenerates and other mentally ill people known as the "entertainment" industry, there is no room for someone who strays from the party line, the party in this case being the de facto Communist Party. The rules constantly change and shift but you must always stay current on what is permitted and what is not. Once you are on the naughty list, your career is pretty much dead unless you are such a big star, like Clint Eastwood or Mel Gibson, that you can't be permanently cancelled, although Gibson spent a long time in the gulag for crossing The Chosen People.
That brings us to today's victim, one Gina Carano. She got on the radar of deviants a long time ago and honestly I can't even remember why but she has been targeted for some time.
The first time I saw her was in Deadpool where she played the villain Angel Dust, with very few speaking parts but plenty of kicking ass. It was a few year later when she showed up in 7 episodes of the new The Mandalorian series on Disney+ playing Cara Dune, a mercenary chick. She isn't a prototypical Hollywood actress, she is a former MMA fighter and is 5'8" and being honest is kinda thicc. She looks like a regular girl you might know in real life. 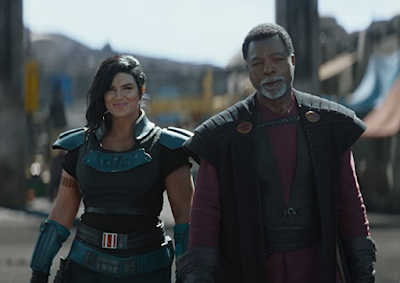 Honestly I didn't even like her character in The Mandalorian, but her failure to follow the rules had people calling for her head. She managed to hang on through last season but then she made a fatal error and is probably done in Hollywood:
Gina Carano faces backlash for social media posts, 'not currently employed' by 'Star Wars'
What was her terrible thought crime? She said this on Instagram:
"Jews were beaten in the streets, not by Nazi soldiers but by their neighbors…even by children. Because history is edited, most people today don’t realize that to get to the point where Nazi soldiers could easily round up thousands of Jews, the government first made their own neighbors hate them simply for being Jews. How is that any different from hating someone for their political views?"
So....how is that "controversial"? It is more or less historically accurate. Demonizing and dehumanizing your political opponents has a long history (see: Words Are Weapons). What apparently makes it controversial and worthy of her being fired is the idea that there are parallels between what is going on today, with "conservatives" being snitched on by neighbors and family, getting doxxed and threatened, actual assaults, losing their jobs, being blacklisted from entire industries and likely soon to be facing show trials for supporting Trump. In other words, her example might have been a little clumsy but it is at least marginally accurate.
That is not allowed. You must not question the righteousness of persecuting the followers of the Bad Orange Man. Our society must be purged of people who think maybe unlimited immigration is a bad idea or that men wearing panties are not women. If that requires a little violence, so be it. The Catholic Church spent centuries persecuting, torturing and murdering people who strayed from orthodoxy, so how is this any different? We aren't quite to the "burning at the stake" stage yet but we are getting close.
It is really significant that so many people think that warning about the dangers of hating one another for political viewpoints is considered controversial.
Of course the other naughty speak in her post was using the Holocaust as a comparison to a current event without the express written consent of the Simon Wisenthal Center or ADL. Sure if you are liberal and especially if you are a Jewish liberal (redundant I know), you can declare any and every current political to be EXACTLY LIKE THE HOLOCAUST!
A dirty little (not so) secret feature of modern life is that the Holocaust, like slavery and conquering the Indians, is a cash cow for some advocacy groups. Sure the Nazis are gone and they are reduced to chasing down and persecuting 95 year old women who as teenagers were secretaries in concentration camps and charging them with 10,000 counts of being an accessory to murder, but still it makes for good theater and fund raising to play "Nazi hunter" in 2021. I am sure little Jewish kids in New York will sleep better knowing that a teenager who typed letter in 1945 is being tried for murder in 2021.
It is the same reason that movies about the Holocaust keep getting made with huge budgets but movies about the Holodomor languish in obscurity. Even though likely more people died in the Holodomor than the Holocaust, the victims of the Holodomor were White Christian Ukrainians so they can't get mentioned in the same breath as the victims of the Holocaust. The Holocaust-Industrial Complex doesn't allow any competitors.
Gina will likely never work in a big budget Hollywood film again so I hope she saved her pennies. She can probably get a gig as a commentator on Newsmax or maybe Fox News, but Fox is just as fanatical about Holocaust stuff as any other outlet so maybe not.
Anyway, as I keep saying, you shouldn't be paying one red cent to Hollywood, or the sports industry or any other woke industries. I am not saying you can't watch their movies and shows, just that you shouldn't be financially supporting them. You can draw your own conclusions from that.
If you recognize that Hollywood is a cancer devouring our culture but still pay to see the garbage they put out, you are like a guy with lung cancer who keeps on smoking. In other words, an idiot.
Stop going to movies and paying for Netflix. Don't watch sports on TV or buy their merchandise.
Quit subsidizing the destruction of your own people while lining the pockets of freaks and weirdos who hate you and want to see you and your family dead.
Oh, and the Critical Drinker had a good send up of the whole thing here:
Posted by Arthur Sido at 9:41 AM