Have You Had "The Talk"?

No, not that talk. That talk is awkward and weird. This talk is deadly serious and sober.
Lots of people make noise about "from my cold dead hands" and other online bravado but do they really mean it? What I mean is this, if they (and you know who "they" are) try to seize your firearms by force, will you get upset but hand them over or will you protect your rights the old fashioned way even if that means you end up dead.
Like dead for real.
When it comes down to it, what will you do?
That is what most people will probably do. But not everyone. Probably not millions of us. If they ban the possession of hundreds of millions of commonly owned firearms held by tens of millions of people, that means an awful lot of gun owners numbering in the millions or even tens of millions, are just going to flat out refuse to turn them in and likewise they are not going to pay an extra $200 per firearm and magazine that holds more than ten rounds. If law enforcement tries to take them by force, it will go kinetic.
It might come to that. While I am pretty sure most local police and sheriff's departments have little interest in getting into gun battles with regular citizens who pose no threat to anyone that does not pose a threat to them, that doesn't mean there won't be plenty of LEOs who joined up so they can push people around will be eager to dress up like commandos and shoot civilians for having an unregistered 11 round magazine.
While this is not on the table right now, it will be. The Usurper has only been in the White House for about five weeks and is already starting to implode. It is only a matter of time, probably in March or April if I were a betting man, before the false flag shooting happens. All of those bills winding their way through Congressional committees are there for a reason. They won't pass today but they will be prepped and ready for a rushed vote before the bodies are even cold. That means you have a little time, but likely not much, to get your shit together and make your decision.
I am not telling you what to do or even what I intend to do but if you are serious about the whole "from my cold dead hands in a pile of hot brass", it it time for The Talk.
Listen up. If you have a family, whether that is just you and your woman or you, your woman and eight kids, 4 dogs and an elderly parent, you have an obligation to provide for them and to protect them. You. Not the cops, not the government.
You.
That is an obligation I take very, very seriously. Even though I am a piss poor husband and father, I always provide for and protect my family. Always.
So it behooves me to talk to my wife about what happens if there is a gun ban that impacts firearms we hypothetically own and what, again hypothetically of course, I would do in such a situation. As it just so happens, we have had that conversation. It is hard and we need to talk more about it but I think the conclusion is pretty clear.
The talk also means making sure your spouse knows where everything stands, what bank and investment accounts you have and how to access them, what your budget looks like, where the money is coming in and going on. Still working on that but if something should happen to me, I want her to be able to carry on as best as she can without having to play Indiana Jones with our financial records. She knows my wishes for burial, in my case cremated as cheaply as possible.
Most of all knowing I love her and I love my family and my people and it is precisely because of that that I have made the decisions I have made, understanding the consequences involved. Living on my knees like a sheep, cowering under the capricious whims of freaks and crooks, isn't a life worth living. Too often our people have chosen the "safe" path and it is close to costing us everything. No more.
I have said for a long time that being physically prepared is only part of the process. Being in great physical shape and having all of the coolest tactical gear won't mean shit if you are afraid to put it to use when it comes time. All you are doing is providing some gear that looks great right up to the point that they saw it in half after you hand it over.
The days that are fast approaching will chew up and spit out people with soft hearts and weak wills. Talk to those you love right now and get your heart and your mind ready. Some things are worse than death and a servile "life" is one of them. 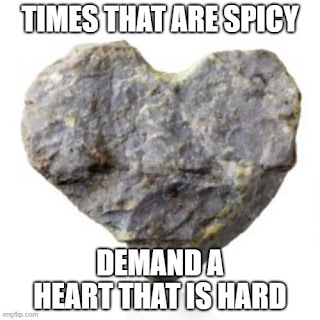