As it became clear to me that Trump was headed for a "loss" in last November's election and former Vice-President Joe Biden would be temporarily allowed to sit in a big boy chair and color with crayons between scribbling his signature on whatever his handlers put in front of him, it has been my contention that we will see some sort of obvious false flag mass shooting in America soon after the inauguration. The shooter will be straight out of central casting, a young or middle aged White male, using an "assault rifle" and with a lengthy social media history including all sorts of naughty speak and probably stuff like #MAGA in his profiles.
It is all but written in stone, the only mystery now is the day it happens.
What I didn't see coming as clearly was that the Left wasn't going to wait for an actual mass shooting to push former Vice-President Child Sniffer's gun control agenda into place. Again, as I have said before, give the Left credit because they learned a lot from prior mistakes and aren't going to repeat them this time around.
The laughable "insurrection" on January 6th is providing all sorts of fodder for the idiot puppets on the Left to make a small group of people meandering around in a public building into a plot for assassinating Congress. Behold retired tavern wench Alexandria Ocasio-Cortez: 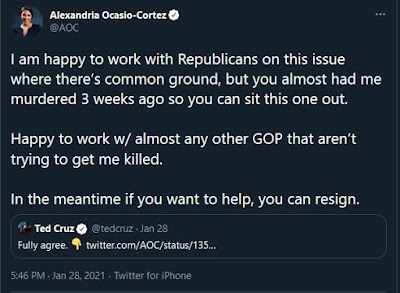 She is outright accusing Cruz of trying to have her killed: "You almost had me murdered" . Give us all a break sweetie, if the intent was to kill you all, your rotting head would be stuck on a spike outside of the Capitol with only your giant chompers recognizable. So instead of being an adult and working with one of the most prominent Republicans in the legislative branch, she instead throws a middle school tantrum online. The spectacle of a tavern wench with an undergrad degree in economics barking at a man who graduated magna cum laude from Harvard Law because he asked legitimate questions about the bullshit election in 2020 is grotesque.
Weird how nothing useful ever gets done in D.C... 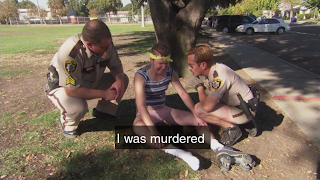 Anyway, the general theme of the "insurrection" on January 6th according to the media was "White supremacy" so of course the random picture of some guy carrying a Confederate flag in the Capitol, likely a paid shill, has been all over the media. To hear them tell it we were moments away from having the U.S. government overthrown by a coup led by a crowd of unarmed NormieCons wandering around and snatching a couple of souvenirs. Obviously we needed 25,000 troops stationed in D.C. with now what are apparently going to be permanent walls around the Capitol. Funny how walls work in D.C. to keep out citizens but don't work on the southern border to keep out illegal aliens.
Without the "insurrection" it is possible that Biden's "inauguration" farce would have been unnoticed by anyone in America.
Yesterday came the most overt linkage yet. Stuff doesn't get posted in the Washington Post, the rag of choice for the mandarins in the Imperial Capitol, without the blessing of the ruling class so this editorial was significant (link to the archived page to avoid the WaPo paywall)
Guns are white supremacy’s deadliest weapon. We must disarm hate.
This is the work of one Sharon Risher. She is a black female "reverend" and her mom was killed in the Charleston church shooting by Dylan Roof so apparently that gives her standing to override the U.S. Constitution. Ms. Risher works with Everytown For Gun Safety, a creation of billionaire Michael Bloomberg. She writes, after scattering a few references to events from over a century ago, the following:
We have begun, as a nation, to slowly address the problem of the Confederate battle flag. NASCAR recently banned it from events, Mississippi recently removed it from the state’s flag, and more prohibitions are hopefully on the horizon. My own story is an example of that incremental progress: The traitorous flag that flew over the South Carolina Capitol the day Mom was murdered was finally taken down a month later, after nationwide outrage.
But the truth is that taking down symbols of hate means very little unless we also disarm people who are inspired by them — and on that front, our nation has lagged woefully behind. We’ve failed to pass any significant federal gun-safety bill in the past 25 years; we’ve allowed armed extremists to brandish long guns at state capitols and intimidate peaceful protesters, and our background-check system remains riddled with gaps and loopholes. One of those gaps, now called the “Charleston loophole,” led directly to the death of my mom by allowing her killer to purchase a gun he was legally prohibited from owning.
So I share my story today, alongside other members of the Everytown Survivor Network, during National Gun Violence Survivors Week, to ask that as we reckon with hate in America, we also take action to disarm it.
How does one "disarm hate"? Well obviously by disarming every American since we are all guilty of "racism and hate", at least the White folks. She very clearly doesn't understand American gun laws and as someone who runs a lot of background checks prior to firearms purchases, I can tell you that the NICS system is far more likely to unjustly delay a background check approval than it is to allow someone to purchase a firearm that shouldn't be able to do so. There is no background-check system "loophole".
The less than subtle message from Sharon Risher, an obvious expert on firearms and the Constitution, is that White people are too dangerous to allowed to own firearms. I doubt she even is smart enough to understand that generally speaking, outside of a few very rare exceptions like the shooting where her mom lost her life, black people are only in danger of gun violence at the hands of other black people and that virtually none of those black on black shootings involve a firearm that was legally obtained. Whether stolen or obtained via  straw purchase, the guns used in the thousands of shootings of blacks by other blacks every year are generally not going to be reduced by enacting more gun laws. So why the push?
The reason for her poorly written screed is the same as every similar editorial or online rant about gun control: to disarm White Americans.
This editorial isn't designed to actually convince anyone by itself but it does serve a purpose in building the rhetorical fantasy that America is an armed camp only moments away from a violent uprising and that the only way to "save democracy" is to enact gun control measures that would have no measurable impact on gun violence.
Keep your eyes open, the wheels are in motion behind the scenes and the goal is clear: we must be disarmed to prevent us from interfering with the planned Great Reset.
Posted by Arthur Sido at 3:59 PM