Another week, another “impeachment” acquittal for Trump as the pre-determined outcome played out in the Imperial Capital kabuki theater. We might get a week or two break before Pelosi tries to impeach Trump again or they go after him as a private citizen.

Meanwhile as the whole farce came to a sudden and ridiculous end, the Coruscant Washington Post, the paper of record for the mandarin class, ran an editorial that seemed like actual incitement: 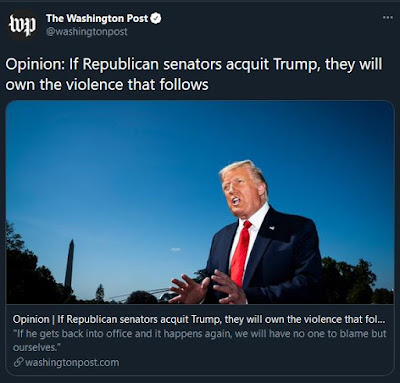 There hasn’t been widespread violence as a result of the acquittal, as apparently even the violent left in America is bored with the whole thing. Still, the idea of essentially threatening Republican Senators to vote to convict a man who isn’t even President or face violence in the streets seems to be something the Washington Post really ought not be engaged in.
Reading between the lines and you start to see how shaky everything is right now. The Left completely controls the government but without any actual leadership the whole thing seems very rudderless right now. The entire country seems to be adrift and it is only a matter of time before we hit an iceberg.