Arthur Sido February 19, 2021 2 Comments
…that the sneering, pompous jackasses of  Conservative Inc. are a far more dangerous and insidious enemy than all of the Democrats put together. Behold National Review hack Michael Brendan Dougherty. 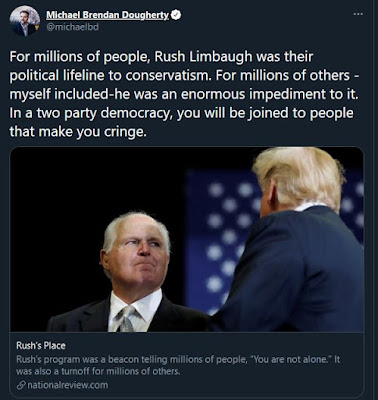 When Ruth Bader Ginsburg, an evil little goblin who eviscerated the Constitution every chance she got, died she was lionized and beatified by the Left uniformly. They understood that she fought their enemy, the American people and our way of life, and they loved her for that.

When Rush Limbaugh dies, a man who made conservative principles accessible to millions of voters, we see people like Dougherty piss on his grave because they didn’t find Rush to be the proper sort of conservative. Actually to be more accurate, they find the people who listened to Rush and later who voted for Trump revolting. They would pretend to tolerate us while snickering at us at D.C. cocktail parties as long as we voted the way they told us but when grassroots conservatives strayed from the Conservative Inc. orthodoxy? They quickly shed their masks and revealed that their hatred of regular Americans pretty nearly matched that of the rabid Left.
It is impossible to overstate the extent to which the grifters of Conservative Inc. hate regular Americans. People who work for a living, who don’t watch the Sunday political shows and instead like to watch football with their buddies, those that work on their own car and hunt deer in the fall.
Bill Kristol famously said that America needs to just replace the White working class with “new Americans”:
Look, to be totally honest, if things are so bad as you say with the white working class, don’t you want to get new Americans in? Seriously, you can make the case — this is going on too long and this is too crazy, probably, and I hope this thing isn’t being videotaped or ever shown anywhere. Whatever tiny, pathetic future I have is going to totally collapse.
No wonder Weasel Willie hated Trump, supported as he was by the same White working class Americans that Kristol wants to get rid of.
The last few years have been chock full of examples and reminders that the gap between what regular people who consider themselves conservative believe that political identity means and what the grifters of Conservative Inc. really care about is enormous, unbridgeable and actually growing. Who can forget this charming piece by Kevin Williamson at, go figure, National Review: The Father-Führer, where he infamously expressed his disdain for the White working class:
The truth about these dysfunctional, downscale communities is that they deserve to die. Economically, they are negative assets. Morally, they are indefensible. Forget all your cheap theatrical Bruce Springsteen crap. Forget your sanctimony about struggling Rust Belt factory towns and your conspiracy theories about the wily Orientals stealing our jobs. Forget your goddamned gypsum, and, if he has a problem with that, forget Ed Burke, too. The white American underclass is in thrall to a vicious, selfish culture whose main products are misery and used heroin needles. Donald Trump’s speeches make them feel good. So does OxyContin. What they need isn’t analgesics, literal or political. They need real opportunity, which means that they need real change, which means that they need U-Haul.
In the annals of ugly, elitist “conservatism”, that paragraph ranks among the most vile and most inaccurate, and I say that as someone who lives in the Rust Belt among people Kevin would consider “the White underclass”. It takes a willful blindness coupled with an undeserved arrogance to pretend that what has happened to the White working class in America is just a coincidence, that the same people who built this country have fallen onto hard times just as people like those writing as National Review applauded trade deals that destroyed their jobs. It is easy to sneer at people who work with their hands while you perform an utterly meaningless “job” like writing pedantic columns for National Review. I certainly have done more than my fair share of that in my lifetime. What I have come to realize is that while the White working class does have plenty of problems, they are far better and more useful people than those who add nothing to our society but scorn.
Just as the elite Left demands that blacks and mestizos vote for them every election while ignoring them and doing all they can to never have to encounter them in real life, the elite “Right” has dangled the promise of issues important to working class Whites for decades but delivered only tax breaks for globohomo corporations and wars for our sons to die in on behalf of Our Greatest Ally. Anyway, I have made my thoughts on Conservative Inc. abundantly clear over the years (ex: Open Borders, Sodomy and Israel: American Conservatism In 2019) but it can’t be stated enough that the Conservative Inc. grifters are far more dangerous than antifa or bLM.
I take some satisfaction in realizing that almost no one knows who Michael Brendan Dougherty is today and no one outside of his family will remember him when he is gone but the impact of Rush Limbaugh, warts and all, will be felt in America for decades to come.