In an all too familiar pattern, early leads for both Republicans running for the Senate in Georgia were magically wiped out late in the evening by massive numbers of urban area votes. No one in either race was particularly noteworthy, other than black guy Raphael Warnock who is a "reverend" and apparently hits women. As has been the case for over four years, it was once again an election that was a proxy fight over Orange Man Bad.
If both seats go to the Democrats, as appears likely, that will mean that the Democrats will have the whip hand and unlike Republicans when they are in the same position, the Democrats won't waste this opportunity. They see the chance to slam the door shut on populism, conservatism and middle American working and middle class Whites. The powers behind the scenes can taste it. While some middle American states like my state of Indiana will hold out for a while, you will see the Left rapidly crushing any resistance to a permanent political majority.
So what happens now?
Of course the first thing we will see happen are the internal Republican recriminations.
The corporate stooge wing of the GOP backed by their buddies in the media will be leading the charge with accusations that Trump destroyed the Republican party and the only way to rebuild for the future is the Jeb! Bush/Mitt Romney model of moderate, milquetoast, lovable loser candidates. Sure they lose but at least no one calls them mean names.
The truth is quite a bit more complicated. Trump is a polarizing figure but he is also an energizing figure. If Rubio or Jeb! had been the candidate in 2016, the Democrats would be celebrating the re-election of President Hillary Clinton.
In 2012, cult member Mitt Romney managed to win Georgia with 2,078,688 votes and 60,933,504 votes overall. In 2016 Trump also won Georgia with almost the exact same number of vote, 2,089,104 with a grand total of 62,984,828, two million more than Romney. In 2020? 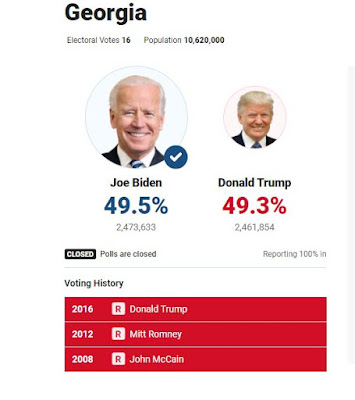 Almost 400,000 more votes for Trump in Georgia and Trump increased his vote total to 74,223,251, twelve million more votes than he won in 2016 and more than anyone has ever received in a presidential election, other than Biden of course.
Trump gave regular people a reason to show up to vote, on both sides. Without Trump, what reason is there for middle and working class voters to go to the polls? So globalist corporations can keep shoving multiculturalism and sexual degeneracy in our faces paid for by tax breaks enacted by Republican politicians? Or maybe so we can keep sending our sons and daughters to get maimed and killed in wars with no national interest for America?
Don't ever forget that the same people telling you now that we have to reject America First and economic populism think you are revolting and wish you would just die out already.
Another thing incoming is massive online censorship.
The Left has been pushing this for years but have been somewhat hampered by Trump being in office. Even still, untold numbers of people on the political right have been systematically censored and deplatformed. With Biden in the White House, this will accelerate at breakneck speed. I wouldn't be surprised to see my blog get nuked, and all of my old stuff as well. My Twitter account, which is my fifth or sixth one, probably is one intemperate reply away from death. Anyone or anything disputing the election results or questioning the coronavirus measures will be banned. Letting us talk to one another was a disaster for the Left and they won't make that mistake agin.
Gun control is a certainty.
I expect to see pistol braces back on the chopping block and this time there won't be anything to stop them. Ditto with imported firearms and ammo which are easier to block with executive orders. Say goodbye to anything not produced domestically, I am already seeing my wholesale distributors saying what they have in stock now might be all we ever get. Hope you got those AKs you wanted, otherwise you are left with Palmetto State (which makes a great AK domestically).
In short order you should expect to see legislation that bans "high capacity magazines" and "assault rifles". Better buy what you want right now. Bottom line, everything Biden wanted to get done on gun control is on the table and Joe Manchin won't be enough to stop it if both Senate seats in Georgia go to the Democrats. How many people just a few years ago would have imagined that Georgia would flip blue? Speaking of which....
Demographics as destiny is going to accelerate the pace of change in American politics.
Why did a state that was reliably Republican for so long "suddenly" turn blue? Demographics. Look at these charts.... 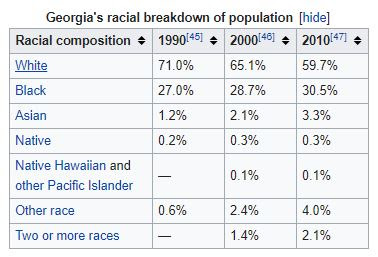 Georgia in 1990 when I graduated from high school was an overwhelmingly White state. From 1990 to 2010, the percentage of Whites dropped to under 60%, and taking mestizos out the percentage is even lower. In 2019 it is estimated that actual Whites make up just a bare majority in Georgia and a lot of those are younger, self-loathing Whites. With a couple of years, Whites will be a minority in Georgia and that means the end of Republicans winning state wide. There is an unbreakable pattern, as states become less White, they become less capable of electing Republicans.
Democrats plan to throw open the borders, import limitless numbers of "refugees", stop deporting illegal aliens and most of all pass amnesty leading to a "path to citizenship". When an extra 10-20 million illegal aliens suddenly become "citizens"? Game over. Expect to see lots of "resettlements" for these new "Americans" in low population conservative states. 50,000 mestizos and Africans in a place like Wyoming could be enough to start flipping those states. They are going to need those states to flip in order to pass statehood for Puerto Rico and D.C.
An explosion in Federal spending.
Even more so than under Trump and Obama, spending is about to go vertical. I made this comment on John Wilder's new post, The Big Hangover: Finland and Bikini Economics (warning, only one bikini graph so kinda false advertising in the title)
On the bright side, at least as of right now it looks like Dementia Joe will have a majority in the Senate so that firehouse of “money” is about to turning into Niagara falls. $2000 stimulus checks incoming, wiping out student loan debt, making college “free”, Medicare for all. Of course nothing will get cut, it will just be added to the existing “debt” but the size of the Federal budget is about to explode.
Add in massive bailouts for blue states that are insolvent (Illinois) and there is no limit to what is going to be spent. Sure it is all fake money but still, that fake money is how we run our economy (such as it is). Biden will sign anything put in front of him as long as you promise him a pudding cup if he spells his name right. On the bright side I am looking at a cool ten grand when the new $2000 "stimulus money" gets signed into law, right after failing to do so helped cost the GOP the Senate.
That is just the stuff I can think of right away but whatever happens will likely be far worse than I anticipated.
Now to see if the Stop The Steal Rally in D.C. turns into Charlottesville 2.0 later today.
Posted by Arthur Sido at 10:51 AM