We Are About To Catch The Car

People in the often overlapping "prepper" and 2nd Amendment communities have been warning of and waiting for the Big One, when the government starts to wholesale ban common firearms and go after existing owners and then we start to gear up and go kinetic.
Like a dog chasing a car that suddenly stops, we are about to find out what happens when what we have been calling for actually comes true and based on what I am seeing, we aren't going to have to wait long.

Missed in the kerfuffle of the Capitol Hill "riots", and maybe that isn't coincidental, there are already a slew of new gun regulations in the pipeline, laws that suddenly have a real chance of becoming law thanks to two new Democrat Senators from Georgia.
Lots of outlets are showing the list of anti-gun bills already on file in the House of Representatives. From Guns.com: AND HERE COME THE ANTI-GUN BILLS FOR 2021

While the proposed texts and summaries for these legislative measures are not yet available to the public, the titles seem largely self-explanatory and likely mimic bills previously submitted by the same lawmakers in past sessions.

H.R.121 - To provide for the hiring of 200 additional Bureau of Alcohol, Tobacco, Firearms and Explosives agents and investigators to enforce gun laws.

H.R.125 - To amend Title 18, United States Code, to provide for a 7-day waiting period before a semiautomatic firearm, a silencer, armor piercing ammunition, or a large capacity ammunition magazine may be transferred.

H.R.127 - To provide for the licensing of firearm and ammunition possession and the registration of firearms, and to prohibit the possession of certain ammunition.

H.R.167 - To prohibit the transfer of a firearm at a gun show by a person who is not a federally licensed firearms dealer. 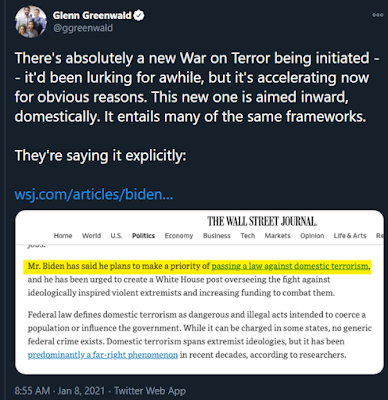 Red flag laws, laws against "sedition", labeling "racism" as a public health crisis, rigging the government payments to advantage Democrat constituencies (anyone but White people) and punish Republican voters (White people), the government using the corporate world to suppress free speech without running afoul of the 1st Amendment.
Again, I keep saying this: Biden isn't even President yet.
When he is in office and signing bills with finger paints? 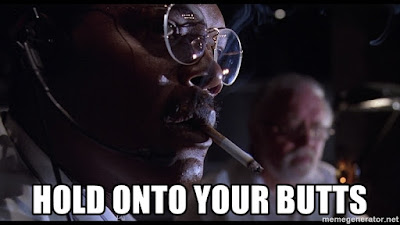 Get ready for what is coming. Be smart and don't get yourself arrested before this thing even starts. Harden your heart. Make contacts and allies in the real world that you can rely on.
Posted by Arthur Sido at 7:52 PM