Then They Came For The Libertarians

On multiple occasions I have admitted in public my brief dalliance with libertarianism. Of course I have since repented in sackcloth and ashes but like many of us on the dissident right, libertarianism was a way station on our path out of normie "conservatism" and into something quite different. But some people land in libertarianism and never leave, partly because it is a harmless past time. No one takes libertarianism seriously so you can be a libertarian and not get called a Nazi cuz you are in favor of legal pot and gay "marriage".
That has suddenly changed.
Now libertarians find themselves lumped in with Literal Nazis in the ranks of "political extremists", at least according to former director of the CIA John Brennan who claims a that there is some sort of political movement that is similar to an "insurgency". According to Brennan, this "movement" includes:
“religious extremists, authoritarians, fascists, bigots, racists, nativists, even libertarians”
Oops welcome to the far right domestic terrorist club libertarians! Brennan is a deeply embedded operative, he wasn't saying this sort of thing without the green light from way up the food chain.
It is hilarious to see libertarians spluttering in outrage. They didn't care much when the "alt-right" was being targeted but now that they are on the list? They are all channeling Greta Thunberg. 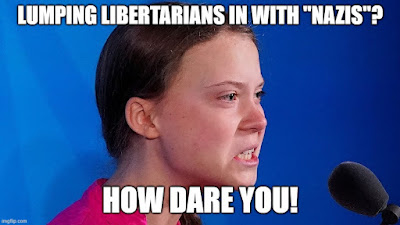 This guy, and I use that term loosely, was especially precoious.

Who is this guy? He has a checkmark so I decided to look and based on his picture I was suspecting he was smoking some poles. Sure enough. 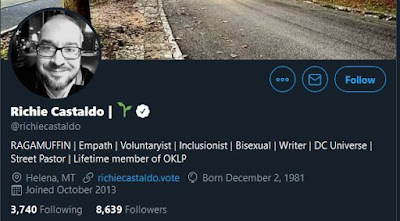 A bisexual street pastor? What is he preaching, the good news of taking it up the butt?
His outrage is awesome but it also says a lot. Libertarians better figure out that one side, the "far right", is willing to let them hold their silly libertarian views. The other side, the "left", will put them in camps without a second thought.
Things are getting pretty serious. The political purges won't spare you just because you voted for the clown car ticket of JoJo and Spike. They are coming after everyone and libertarians don't get a free pass. They can choose to join with people like me - or - they can swear allegiance to Marxism - or - they can get on the cattle cars and head for the gulag. There isn't another option. The NAP has already been violated and it is only going to increase.
We no longer have a place for any sort of free thinkers, political principled occupation, any of that crap. We are in the end stages now and there isn't a participation ribbon for second place, just a shallow mass grave.
Posted by Arthur Sido at 3:37 PM