The Sound Of Silence

In August of 2020, a violent criminal with a number of disturbing convictions named Jacob Blake was terrorizing a woman in Kenosha, Wisconsin. The police received a call of a possible domestic violence incident. As I have been told and I think any cop would agree, domestic calls are some of the very worst because of the level of emotion involved. The police responding knew that Jacob Blake has a felony arrest warrant for "domestic violence charges and a sexual assault charge". The woman who had called the police told the officers arriving on the scene that Blake was trying to take her car with her children inside. Despite efforts at using physical force and non-lethal means of subduing Mr. Blake, he refused to comply and tried to get back into the car containing the children, and was visibly holding a knife. When he tried to get in the driver's side, police grabbed him and he swing his hand holding the knife at the officers. At that time the officers opened fire, striking Mr. Blake a number of times and although he did survive, he apparently is now paralyzed. At least he won't be sexually assaulting anyone again.
Oh, I didn't mention the only factor that matters when deciding if a police shooting is justified:
Jacob Blake is black.
He is also one of "those" black men who lead lives of violence before inevitably ending up in prison or dead. 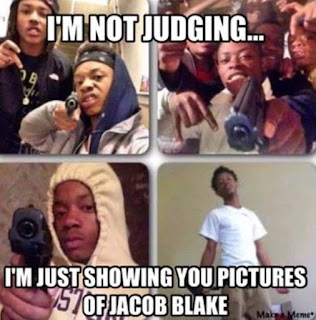 The rest is history. Violent rioting and looting engulfed the city of Kenosha. The images are some of the worst from the generally awful year of 2020 although this one is delicious for the bitter irony of a "church" thinking virtue signaling would save them: 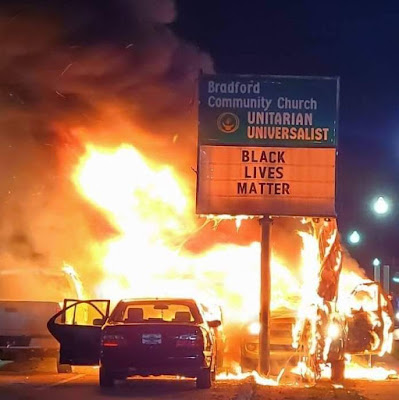 This led to the shooting of three criminals, including a pedophile, by Kyle Rittenhouse, an Illinois teen trying to protect businesses from looters and that event further divided Americans into our separate camps, those who think Kyle is a bad kid who should be charged for murder and those who think Kyle is a damn hero. His case is ongoing.
Then something happened and weirdly something else didn't happen.
In the early days of January 2021, the District Attorney announced that no charges would be filed against the officer who shot Jacob Blake. Normally, and by normally I mean by 2020 standards, it wouldn't have mattered that Blake is a piece of shit who hurt women or that he resisted arrest or that cops tried to control him with non-lethal means or that he had a knife and was swinging it at an officer. Nope, he is black and there is never, ever a justification for shooting a black body. Being "shot in the back" should have made it even worse.
Normally, and again by normally I mean in say for example October of 2020, if police shot a Looter-American and then those police were not charged, cities would burn, shoe stores would be stripped of Nike shoes and Wal-Marts would have a 100% off sale on big screen TVs. But the police involved in Jacob Blake being shot weren't charged and....
...crickets.
The Wisconsin guard was called out and 500 troops were in Kenosha ready for trouble. Instead we got this enormous demonstration:

Maybe two dozen people walking around in the bitter cold. The National Guard has been withdrawn and nothing was burned. Obviously there will still be lawsuits because a black man getting shot is like winning the lottery for his family but it looks like there won't be any other repercussions.
What happened?
The election and subsequent vanquishing of Orange Man Bad happened.
If I didn't know better, I might suspect that the riots and looting last year were not after all spontaneous outpourings of rage and grief over the mistreatment of black bodies but instead were coordinated efforts designed at creating a sense of instability and chaos that would encourage people to want to put the Orange Man Bad era behind them.
Remember that no one, probably not even "Dr." Jill Biden, voted for Joe Biden because they listened to him speak and thought "This guy has it together, he should be given the nuclear codes". Instead they were voting against Drumpf.
Now that Cheeto is vanquished? The coordination of these "spontaneous" riots has apparently vanished.
How very strange. It is almost like these people have been manipulated because they are easy to get in a froth and prone to rampaging violence.
The puppetry going on is pretty impressive.
Posted by Arthur Sido at 9:26 PM