There are many rituals in our lives, most of them quite meaningless. One that is familiar to all air travelers is the safety speech delivered in a perfunctory manner by the stewardess as the plan prepares to take off. Most people ignore it completely and you can tell first time flyers because they get the little placard out and follow along. Anyone with an ounce of sense knows how dumb this is. If a plane falls from the sky, you are going to die. Putting your head between your knees will just alter the pattern your shredded body leaves on the ground. Still we submit to it out of habit, like the “No Smoking” signs that light up on planes when you haven’t been able to smoke on planes for most of my lifetime. 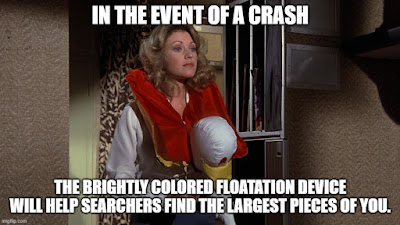 Air travel is a miraculous invention. Humans were not intended to fly, we are too heavy and don’t have wings but that didn’t stop a bunch of people from trying to figure it out anyway until today when air travel is something we accept without much thought. When you stop and think about all of the stuff we take for granted and that essentially all of it comes from Europeans and Americans, it should remind us that without what the Left calls “White supremacy”, humanity as a whole would be living at a subsistence level existence. So, you’re welcome I guess.
Anyway, the safety speech is dumb because a jetliner falling out of the sky is going to go boom when it hit. If you have a great pilot, maybe he can guide you in for a less catastrophic landing but generally the “landing” involves a debris field.
So why do they bother with a safety speech no one pays attention to?
Because it makes you feel safer getting into a super thin metal cylinder strapped to a couple of high power jet engines and catapulting off the ground. If you are driving and your engine stops running, you coast to a stop and have to call a tow truck. If you are flying and the engine stops….
See: Field, Debris
However if you have a little video about safety and what you can do in the event that a plane that you have no control over starts to plummet toward the ground, it gives you a false sense of control. Sure the plane might crash into a cornfield in Iowa but my seat cushion doubles as a flotation device. 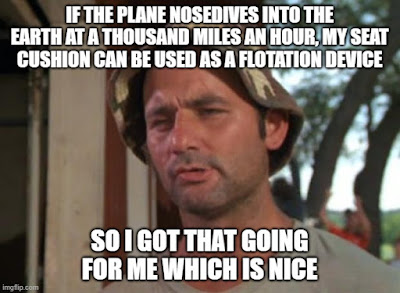 It is the same reason we have elections and inaugurations. Sure the elections are clearly a farce and the outcome in 2020 was predetermined, and sure there was rampant cheating and a man with dementia is about to be handed the nuclear football, but we got to stand in line to cast our ballots so we got that going for us….which is also nice. It makes us feel better.
Imagine the captain of the airplane coming on the PA and saying “Ladies and gentlemen, the engines just cut our and we are plummeting toward the ground. Please start flapping your arms to keep this bird in the air!”. That would be dumb because a few hundred people flapping their arms inside of a plane won’t make any difference in whether the plane crashes. The only thing that might make a difference is the skill of the guy/gal/gender non-binary freak that is flying the plane.
If your pilot is a man with dementia and a penchant for sniffing little girls and the co-pilot is a literal whore who didn’t go to flight school and only got the job as a co-pilot by sleeping with airline executives?
That sucker is going into the ground at top speed and you are all going to die.
As it just so happens, that is exactly what the political situation is right now. We had a pilot who was mostly incompetent but came on the loudspeaker every few minutes to remind us that this was the best flight anyone ever and that he was the best pilot and everyone says so, even as the engines were bursting into flames. A few hours ago, a man who is so out of it that he probably thinks he actually won the election fair and square was sworn in as President in front of an audience of 5 or 6 people while a literal whore was standing behind him smiling and sharpening a knife.
The plane was already going down but now Biden is going to push the throttle forward all the way.
Meanwhile, most normiecons are still flapping their arms really believing that if they just think positive thoughts and flap their arms a little harder, we can pull out of the tailspin. I don’t blame them necessarily, they are so invested in the system that they can’t imagine life outside of that system so even as their numbers and influence shrink, and the other passengers on the plane spit on them, they keep on flapping their arms because It Is The Right Thing To Do.
Stop it.
We have been exhausting ourselves for decades trying to stop the inevitable. When they shipped jobs overseas and down-sized co-workers, we just worked harder. We let them dictate what topics we could bring up and they just kept changing the list. We protested meekly when they called us “racist” so then they called us “Nazis” and “White supremacists” and we just kept trying to explain why, darn it, that just wasn’t true. They forced homosexual “marriage” down our throats because “love is love” and then they put trannies in libraries reading to children and demanded we let deviants into locker rooms with our daughters.
When we finally took a small stand and elected Trump, they went crazy. Now they have moved past juvenile name calling and started talking about South Africa style tribunals, show trials, re-education camps and many less than veiled threats of violent retribution because the way we voted hurt their feelings.
We are the worst people in the world…
…but keep going to work to keep the lights on and paying your taxes.
Screw that.
Quit trying to keep the plan aloft. Stop flapping.
You should be figuring out right now how to game the system (*legally of course). Everyone else is looting the rotting corpse that once was America, you might as well get yours. Figure out how to maximize what you can leech from the government. If you are working class with a couple of kids, get food stamps and Medicaid. Why should you pay while others only take? Stop doing the little stuff that helps keep America running. All you are doing is subsidizing your own eventual banishment to some gulag. Find ways to earn a living outside of the system, get a skill you can use for barter. Stop being civic minded.
Starting right now you can only be focused on your family and your real life circles.
Our suicidal altruism has led us to this point and it is going to be the death of us.
The people I am talking to and talking about know what I am saying. We are the people who make America work and it has been nothing but us giving and others taking for my entire life. Enough of that.
Stop flapping and let this bird go into the ground. It is going to anyway, you better be trying to prepare yourself to survive the crash instead of trying to delay the inevitable. You live in an occupied nation that just inaugurated The Usurper Joe Biden and his whore running mate. Every aspect of America hates you and is working to stomp you into the ground: the government, the media, most religious institutions, the entertainment world, the education establishment, labor unions and of course big business.
Hate them right back and give them nothing you don’t absolutely have to.
The past is the past and it ain’t coming back. Nostalgia won’t save us.
The present is an awful dystopian nightmare. The dumbest, cruelest, most degenerate and wicked people rule this land now in earnest.
Our only path is forward to a destination that we might not live to see but perhaps our children will one day live free like we once did. I saw this on social media and had to lift it because it is pretty profound. 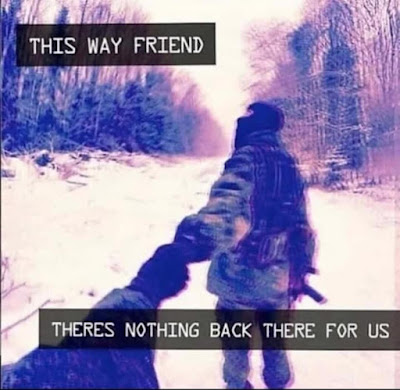 Stop flapping and start living for yourself and your loved ones. Fuck everyone else.