Attorney Lin Wood is given Vox Day a run for his money.... 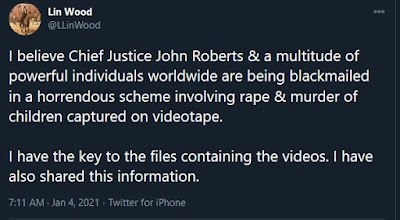 So when are we going to see this "evidence"? Spoiler alert: never.
I am not saying that many of the most powerful people in the world aren't deviants and pedophiles, hell many are murderers (Hillary for example). I am sure Jeffrey Who Didn't Kill Himself Epstein had a ton of dirt on a bunch of powerful people. But I am saying that an attorney most people had never heard of until Kyle Rittenhouse suddenly claiming to have video evidence, or at least the "key to the files", whatever that means, probably isn't sitting on something that explosive waiting for...well, we are not sure what exactly. This is a distraction to keep people occupied instead of getting ready for the real hard work to start.
Apparently Trump is so powerful that he not only turned the entire Left completely insane but he has managed the same with a lot of the Right.
Posted by Arthur Sido at 8:49 AM