For the last 4 years, we have been forced to endure simpletons with "#resist" and "Not My President" and other stupid shit in their social media profiles. It is hard to imagine what they thought they were resisting as every significant institution and center of power, including the executive branch other than Trump himself, was uniformly on their side. It is hard to be the plucky band of rebels when everything you say is exactly what the powerful and wealthy are also saying.
But Big Country Expat at The Intrepid Reporter had an interesting thought today in his post: Well THAT Escalated Quickly....
So now, the New Roolz
"Resistance" = Bad.  If you resist the current bullshit and the upcoming bullshit, first, they'll label you a 'Racist' when the Ho takes over from Slo.  It that doesn't work, they'll up the ante to 'Insurrectionist'.  And then, 'Seditionist' and 'Terrorist', along with ALL the unpleasantness, to include droning your house with a Hellfire.
Remember kids, for the last four years "resisting" the occupant of the White House was noble, stunning, dare I say brave.
But now, if you disagree with anything The Usurper Joe and The Ho have to say? 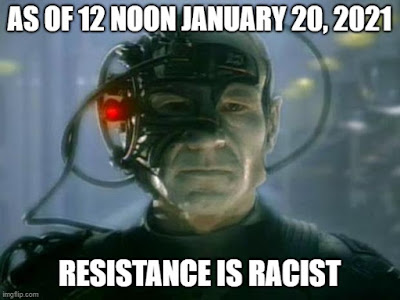 At least the rules are clear.
When "literally worse than Hitler" dictator Trump was in office, you could call him the most vile things imaginable and even say awful shit about his wife and kids, and you not only faced no repercussions, you were applauded for your bravery.
If you say anything at all about the new administration other than fawning praise, you are a racist and quite likely a "domestic terrorist" and you should be hounded at your home, lose your job and probably just shot.
These are the new rules. Crying about it won't change anything. Telling them to shove their rules up their collective corpulent asses and saying whatever you want? Incredibly freeing.
Oh, and congrats to Big Country Expat for gaining a spot in the coveted "My Top Five Favorite Blogs". BCE may not be the gentlest soul around but his voice and tone are just what we need these days.
Posted by Arthur Sido at 8:44 PM